This is something very special. There were times I did not believe I was watching an amateur production, such was the quality of the piece.

Loosely based around the characters and plot of Puccini’s La Bohème, the show explores many adult themes as it tells the story of a group of impoverished young artists struggling to survive and create a life in New York’s ‘s East Village. The first half explores how the characters met and who they are, the second is more a reflection of what happened next and who they become in the seasons of love that follow.

Dawn Broomfield has created a piece of theatre of which she can be immensely proud. Her attention to detail, from Roger’s black nail varnish to groupings, is extraordinary, but most of all she draws out an intensity of performance from an extraordinarily talented cast. The show demands focus and drive but more than that, a belief in the realism of the situation – and that has to come across in the relationship body language. No holding your opposite partner at arm’s length with the occasional peck on the cheek here at all: Dawn makes it real by allowing the girls and boys to drape around each other in a natural way so you are enthralled by the emotion. And all the cast appear to relish this opportunity and seize it with real zeal and panache. 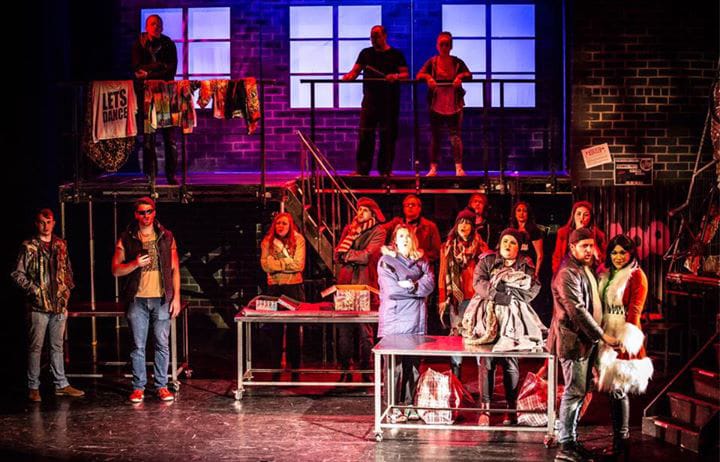 In an ensemble piece – and I mean a real ensemble piece where everyone is allowed to shine and have a moment – it is difficult to reflect and focus on too many individuals, as it may imply detriment to others. I have to mark the contribution of the highly professional-sounding band. It is a sung-through work, like an opera, and they work so hard and have a great sound and pace with Christopher Ball at the helm and on piano, with Jason Beaumont, George Storrey, James Gale and Daniel Brown in full wonderful flight from start to finish.

The singing throughout, solo, duet and ensemble, is likewise highly professional. This work is not an easy sing, yet the cast make it look effortless, especially the complex harmony work on ‘La vie Bohème’ and of course the signature opening of act 2, which sent tingles down this reviewer’s spine.

Character development and interaction are superbly followed through, Maureen and Joanne’s turbulent relationship being particularly well portrayed and passionately expressed by Katy Watt and Anghared Morgan on excellent form, the latter also sashaying her way through ‘Tango: Maureen’ with a vibrant Sam Gregory as main narrator/film observer, Mark. Jim Smith and Vicki Jo Keens bring tenseness and sultriness to their portrayed relationship as Roger and Mimi, the ‘Will you light my candle’ sequence being very well done as both playful yet mysterious, a winning combination.

For sheer emotional response (audible weeping around me) I have to cite the performances of Liam Baker and Gerson Sunggay as Tom and Angel. The eulogy song is quite sublime (sorry, spoilers) for the masterful creation of Angel, who just radiates everything I suspect composer Jonathan Larson wanted in this uniquely created character.

James Gould brings a sense of roundness and fondness to Benjamin Coffin III, a character that has at times in the past just been Mr Shouty Nasty; this is a nicely done different approach which gives Mimi more than just opportunist reason (money) to be with him, giving credence to the eventual Roger relationship, too.

I cannot recommend this production enough as value entertainment. It is on until 14 April.

Mark Barton-Leigh, who is stepping down as Chairman of the Group, has indeed gone out on a high.