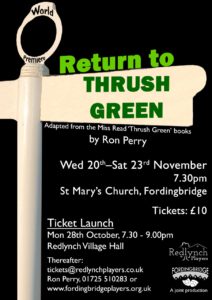 Community theatre can be many different things to many different people, and may be defined as “theatre made by and intended for members of a community”. In this instance, it is a collaboration between two well established local drama groups, Fordingbridge Players and Redlynch Players, to perform to their friends, families and loyal supporters the world premiere of this play by Redlynch Players’ own Ron Perry – and it has provided for the community a very amusing evening of comical entertainment, much needed in the current climate!

Return To Thrush Green is the sequel to Perry’s previous original adaptation of Miss Read’s Thrush Green novels, a catch up with the residents of the fictional Cotswolds village of Thrush Green. As I hadn’t seen the original play, or read any of these novels, I was a little apprehensive beforehand that I would spend most of Act 1 wondering what on earth was going on. I needn’t have worried! Although the script makes reference to the previous production – at least, with some of the dialogue, I presume this to be the case – the narrative flows, the characters are easy to follow (assisted by individuals breaking from the character conversations to provide the audience in an aside with a brief insight into who each character is and their connection to Thrush Green) and the production stands on its own merits.

There is so much to enjoy in this essentially light hearted, but at times poignant, comedy – not least the delightful original music performed at the start of the play (‘The Power Of Healing’, written and performed by Andrew Harrison-King). Although this is a very cohesive joint venture between the actors from both groups of Players, there are a few absolutely stand out performances.

Without ever stealing focus from the others, Jill Saunders nevertheless manages to steal every scene she’s in as “I don’t know why they call me” Dotty Harmer – her comic timing and physicality are hilarious, but she also shows a vulnerability in her character which is both enchanting and endearing. Nicki Salmond commands the stage with the authority she brings to haughty and precise Mrs Cleary, while bringing warmth and gentleness to her cameo appearance as primary school teacher Miss Dorothy Watson.

There is excellent support in particular from Graham Simpson (amiable and committed Rev’d Charles Henstock), Sarah Turner (bustling and seemingly efficient church warden, Mrs Ena White, despite her propensity for malapropisms), Ali Silver (stalwart Ella Bembridge), Sarah Newman (amorous and single-minded widow Nelly Tilling) and Mark Newman as the postman, Willie Bond, who would never, ever be a source of gossip!

Special mention and credit should go to Wendy Reid as, due to cast illness, she stepped in to read the part of Ella Bembridge’s housemate, Dimity Dean; it is quite a skill to portray a character convincingly whilst reading from a script, but Reid managed this with style, crystal clear dialogue delivered in an authentic manner and with a natural flow of accompanying movement.

Staged in St Mary’s Church, Fordingbridge, the set blends the Cotswold stone effect cottage fronts with the stone arches inside the church, enhanced with the addition of AstroTurf to cover the floor of the aisles, and the chorister pews and altar, atmospherically lit, provide a beautifully effective backdrop to transport the audience to a quaint 1950-1960s village green. There is a great attention to detail with the array of props, costumes, rural or clipped accents and manner of speaking, and hair and makeup, to firmly establish the time setting and geographical location, while the use of the changing posts on the village notice board clarified the years and locations with a very nice touch. The combination of live organ music on entering the church, cast members mingling in character with the audience, community hymn singing extracts at the start, an audience raffle and the quaint sweet stall and ‘Two Pheasants’ beverages during the interval all help to immerse the audience in the charming venue of Thrush Green.

The now sold out Return To Thrush Green continues at 7.30pm each evening until Saturday 23 November.