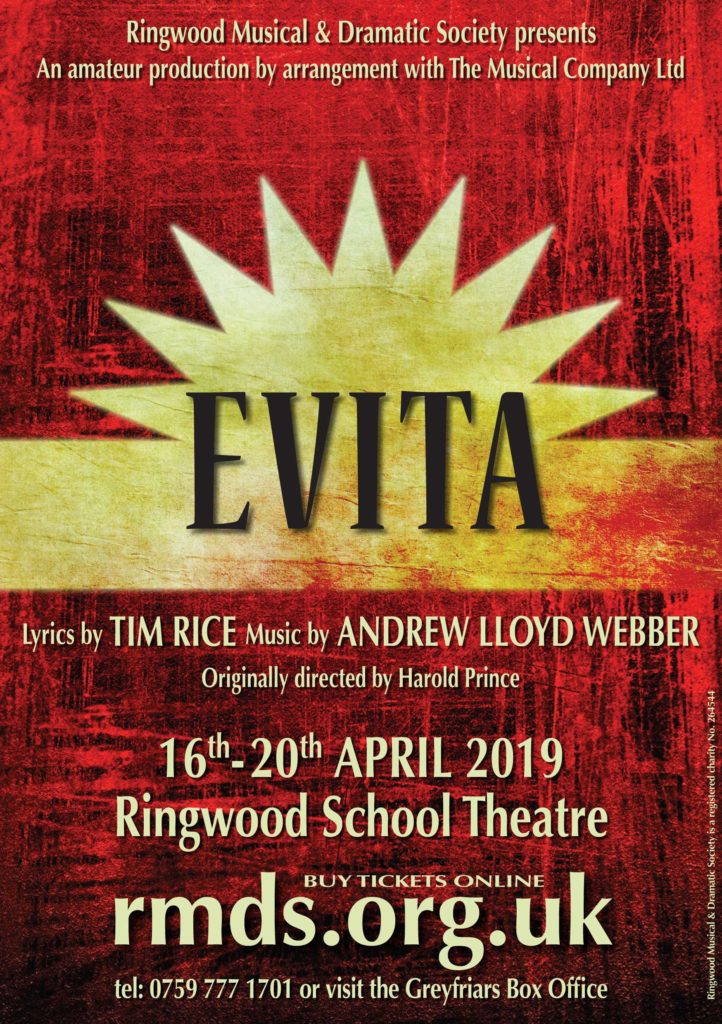 The show which launched the career of musical legend Elaine Paige, Evita tells the true story of Argentinian First Lady Eva Perón. An example of Andrew Lloyd Webber and Tim Rice magic, we follow our flawed heroine from her rocky beginnings through her rise to power in 1940s Argentina. Perón’s alignment with the working class (and disparagement with the upper classes) famously led to her harnessing an ethereal quality and divine power over ‘her’ people (Santa Evita), though the show’s poignancy comes from our leading lady eventually coming to terms with her own mortality.

Ringwood Music and Drama Society have, on the whole, risen to the occasion well as they tackle this challenging musical. An entirely sung-through musical, the show features strong lead vocals and mostly simple but well-learnt harmonies alongside effective choreography and staging. Director Chrissie Peckham ensures the minimalist set ensures it does not detract from the emotional heart of the story. This is particularly true of the closing scenes where Eva contemplates her choice of fame and politics over a long life; telling the audience “the choice was mine and mine completely…” (Lament).

It would be unfair to make a direct comparison between Elaine Paige and last night’s Eva, but Stephanie Jones adds her own style to a character who, at times, is more disliked by the audience rather than loved (‘Goodnight And Thank You’). Stephanie has a wonderful vocal range and whilst there were quite understandably nerves at the beginning of seminal song ‘Don’t Cry For Me Argentina,’ by the end she demonstrated a fluid control over her voice, favouring authentic emotion above what could have been exaggerated vocals. It was a shame there was no opportunity to give the song the round of applause it deserved but Stephanie certainly did herself proud.

In the role of Ché, our revolutionist narrator, Duncan Reid works well alongside our leading lady and showcases remarkable stamina in this rarely-offstage part. He adopts the quirks, mannerisms and accent of this working class character well and I particularly enjoyed his riffs in ‘The Money Kept Rolling In (And Out)’ and waltzing duet with Eva (‘Waltz for Ché and Eva’), which is choreographed effectively by Jenny Elward.

Michael Leggett as President Juan Perón is suitably likeable as Eva’s doting husband, acting as a nice contrast to Eva’s first love affair with tango singer Augustin Magaldi, played by Matthew Elward. The audience are in for a treat with Elward’s impressive command of the top of his vocal range. Similarly, in a character only known as Perón’s mistress, Gina Elward harnesses angelic tones to sing the iconic ‘Another Suitcase In Another Hall,’ and temporarily aligns the audience’s sympathies with herself above our heroine.

Unfortunately, there are various points throughout this production where diction is lost, and if you are unfamiliar with the story, it is sometimes easy to lose track of what is happening, particularly when the volume balance between band and singer swings in favour of the band. However, perhaps this can be forgiven when you consider the sheer amount of lyrics both named characters and the ensemble have to learn. I am also aware that the rights to Evita stipulate use of a ‘click track,’ and as such, the cast and impressive nine-piece band, led by Musical Director Jonathan Spratt, did well to keep up with the Latino rhythms and tempo changes, simultaneously evoking the raw power of Lloyd Webber and Rice’s musical score.

There are other nice touches dotted about this production, including the decision to use Pathé video and the commitment of the ensemble to their roles. However, I must make a final mention to the costume, wardrobe and hair departments who realistically transform our leading lady from carefree teen to Argentina’s political idol within a two hour slot, a journey which would have ordinarily taken twenty years.

Overall, I enjoyed this production and wish cast and crew the best of luck with the rest of their run. Further performances at Ringwood School every evening at 7.30pm until April 20, with a 2.30pm matinee on the Saturday. Tickets £12.