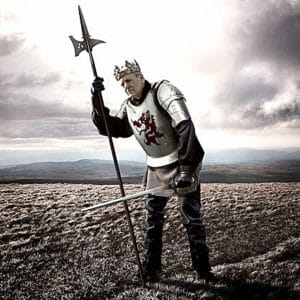 BOAT has done it again!

That is my headline, based on last night’s production of Shakespeare’s Richard III in the Open Air Theatre on Brownsea Island.

The historical figure of Richard III has received a lot of publicity since the discovery of his remains in 2012. Most people are now aware that he was killed during the battle of Bosworth Field in 1485 and was buried under a car-park in Leicester. This frees me from the problem of having to write a review without disclosing the plot – a restriction which applies to some of the plays they send me to see. Some people are also aware that history is written by the victors and that the older written historical records and paintings may be heavily biased in favour of Henry Tudor, who became Henry VII and the first of the Tudor line – of which Elizabeth I was also a member.

So we can assume that Shakespeare’s portrayal of the last of the Plantagenets (our last monarch to die in battle) is not wholly true to life. This is just as well, as I can’t imagine any real-life figure being so completely wicked and without any moral compunction or redeeming features – Shakespeare’s Richard III makes Abanazar, the Sheriff of Nottingham, Captain Hook, and any other villains that you can think of, look like pussy-cats.

What a stonking performance we saw by Tim Fearon in the title role. He commanded the stage and our attention at every turn, every evil twist in his scheme had us both shocked at his wickedness or, paradoxically, chuckling at some of his asides. His vocal range encompassed both a barely audible (but it was audible) stage-whisper to the thunderous cry of “I am not in the giving vein today” and everything in between. It was an outstanding performance and well deserving of the standing ovation from the near-capacity, opening-night audience.

There were other parts deserving of gold stars: Alice Drewett, as Lady Anne Neville, Richard’s wife of convenience – until he needs another; Stuart Glossop, as the multi-murderer, Tyrell, another baddie without any obvious redeeming features; Brian Woolton, as Henry Tudor, Earl of Richmond, the victor and future Henry VII; Angela Wyatt, as Richard’s mother – who delivers a blood-curdling speech as she curses him before the final battle; Harry Susser, as the loyal, but ultimately ill-fated, Duke of Buckingham. The list goes on.

The staging, atmospheric effects, smoke, lights, weird sounds and music were as good as we have come to expect on Brownsea. I liked the illuminated candles and loved the inventive way that the Yorkist banners were removed to reveal prison bars, which themselves became pikestaves for the battle. The dream scene during the night before the final battle provides one of the most powerful and lasting images of the production – but (minor niggle) I wish that we hadn’t had full view of a very 21st century bank of red LEDs behind the central doorway.

That final battle itself was another tour-de-force by fight choreographers and weaponers Richard Batt and Peter Beebee and of lighting design, smoke and effects. There are obvious dangers as 20 or so actors charge around the stage in the semi-dark waving swords, daggers, banners and pikestaves. For this reason, I suspect that this one scene took up a lot of rehearsal time – but it was worth it. I hope that no-one gets injured during the production run.

The most famous line in Richard III has to be “A horse, a horse, my kingdom for a horse” – a fact mentioned in the explanation in the programme as to how and why the play has been cut from four hours down to, a more easily digestible, two hours. Amazingly, we had a horse – maybe it wasn’t as completely articulated as the celebrated one from the stage production of War Horse, but it was a full sized, moving model. It was, apparently, created by the director, Neil Mathieson – who also operated it from inside.

As one of the historical plays there isn’t a lot of scope for comedy. There are 12 deaths, most of them brutal, but this production wasn’t without its laughs. Not only did we chuckle and snigger (somewhat disturbingly) as Richard revealed to us his evil plans and casual disregard for life, love and loyalty, but we even laughed at the crude and obvious illusion used to portray the beheadings. These macabre moments of levity help to punctuate and lighten what is otherwise a fairly grim story.

Neil Mathieson, Tim Fearon and the whole cast and crew deserve our hearty congratulations and appreciation for their talent and dedication in the marvellous performance that we saw last night. The show runs again tomorrow (Friday 26th), and then on Mondays, Wednesdays and Fridays until the 9th August. For each date there is a contingency plan to perform on the next day if a performance has to be cancelled due to bad weather. At the time of writing there are tickets still available for all performances – but not many. Make sure you get one!