Having spent the best part of the last two weeks stuck at home with a nasty virus I picked up on holiday, I couldn’t have been more pleased that one of my first ventures back into the outside world was to the annual show that I have regularly described over the years as my end-of-term treat.

The RMDS Summer Show is the stuff of legend: three completely separate short entertainments, each seen in turn by the audience – who are also divided into three – and with plentiful nibbles on hand during the breaks to sustain us as we walk from one part of the building to another. And yes, those blue cheese rolls of which I am so fond are still there in abundance, playing their part in making me one very happy reviewer.

Each year a generic title is chosen – this year’s being Whose Line Is It Anyway? – and the three directors then have carte blanche to develop their own entertainment that loosely fits the title. I never cease to be amazed by the sheer ingenuity that goes into the choices, and certainly in this case they simply couldn’t have been more different.

‘Headline’ looked at the headlines in people’s lives: relationships, feelings, wants and needs, and support from friends and community groups. Whilst the subject matter was a little thought-provoking, the manner in which it was treated provided humour, not least in the lovely ‘Mix tape’ from Avenue Q, and I certainly left the hall with a smile on my face.

‘Production Line’ provided a complete contrast, with a team of yellow-hatted ants ordered by their Queen, Tyrant, to steal leaves from the rival blue-hatted ants – with devastating consequences for the Queen but a rise in status for short, shy Elephant. This was more of a short story than a musical entertainment, but incredibly enjoyable nonetheless. 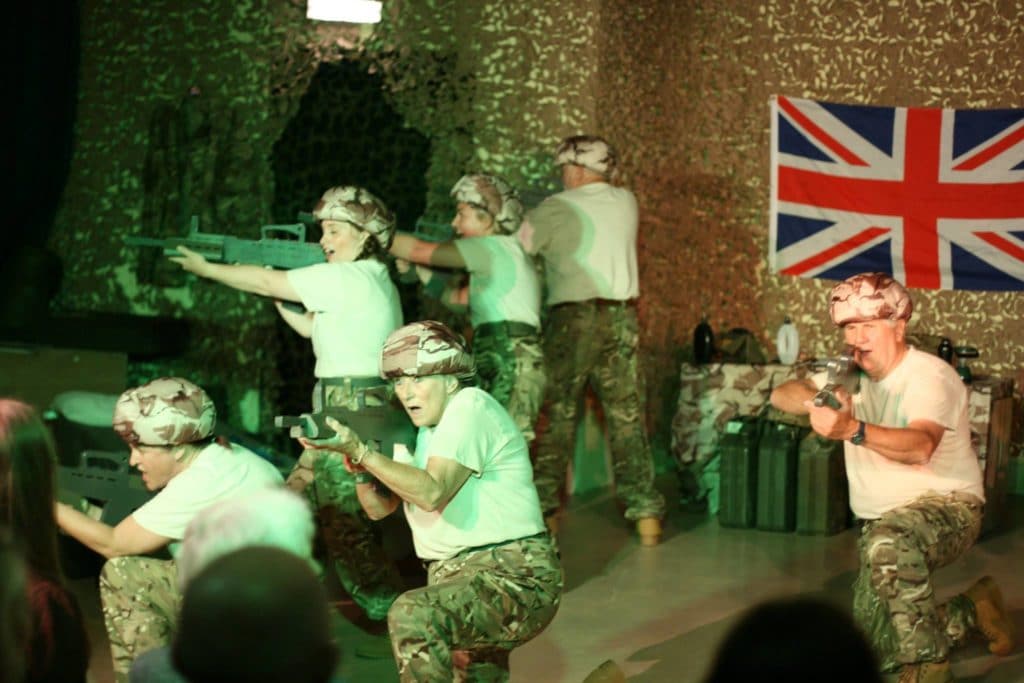 I’m never quite sure if it is fair to pick out one section and laud it with praise when absolutely everyone has put in so much effort, but ‘Front Line’ simply took my breath away with every aspect of its production. Not only was the square-bashing worthy of anything one might see on the parade ground at Sandhurst, but every detail was well thought out and perfect – the guard room where the men read or played cards, the officer on a laptop, the girls reading their letters from home and the men in the khasi (I’ll spare you the details of that one). There were some great songs too, not least a re-worked and hilarious number from The Producers regarding boots, headlined by the excellent Lucie Evans; Bernie and Jo Guy’s ‘I’m all alone’ from Spamalot; Adam Davis’s ‘C’est moi’ from Camelot; and what was surely the highlight of the evening, a glorious duet from Niki Deedman and Catherine Smith, whose voices blended to perfection.

Finally, a big part of the evening is always the contribution made by each section’s ‘leader’. Ours was Mark Amos, who had us in stitches throughout and definitely deserves his own huge round of applause for his part in making this such a thoroughly enjoyable evening.

There are further performances on 26-29 July at 7.45 – but hurry, as availability is now very limited.