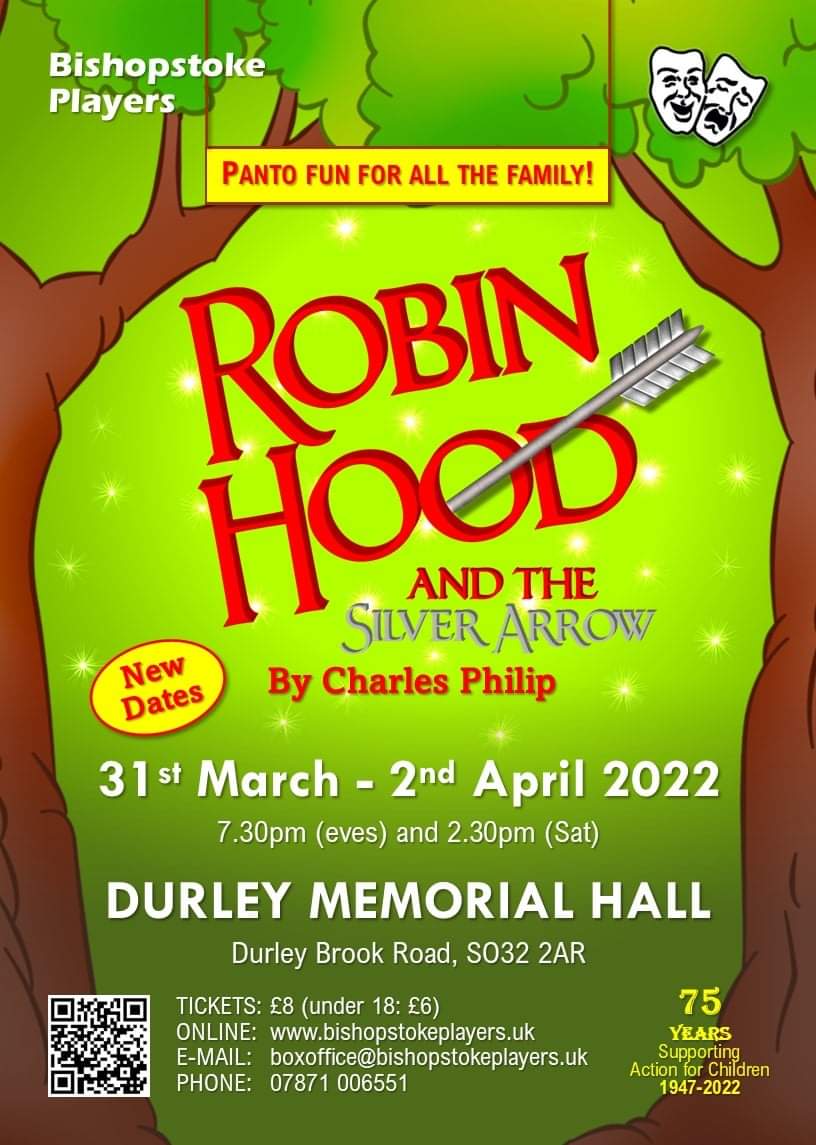 The Bishopstoke Players return once again for their latest Pantomime Robin Hood And The Silver Arrow. After sadly being forced to re-schedule from earlier in the year, the cast were ready and raring to go! Performed at the Durley Memorial Hall this show is community theatre at its finest. If you’re looking for a night of giggles, this is the place to be.

Perhaps lesser-known as a Pantomime, we follow everybody’s favourite outlaws, Robin Hood, Little John (with extra little John!) and their band of ‘Merry People’ on a quest to outwit the evil Sir Guy of Gisbourne. Robin tries to win the silver arrow and ultimately the Maid Marion’s heart, in an archery contest set up as a trap by comedy duo Dwayne Pipe and Wayne Bow.

The show opens with a welcome from the narrator of the story: Friar Tuck (Stefan Dimitrov) and while this is not the traditional opening of a chorus village scene we see in most Pantomimes, it suited the production well and Dimitrov dipped in and out of the action with ease.

Title role Robin Hood (Lizzie Sellars) is a confident lead with good comedic timing while Dame Henriette Hood (Steve Hunter) dons the most interesting costumes of the evening, including a lovely pair of melons and an AstroTurf grass skirt – a great traditional Dame.

Maid Marion (Lola Barrett) delivers her lines with expressive skill and precision, ensuring every word was heard, she certainly showed the audience a thing or two about equal rights!

Sir Guy of Gisbourne (Richard Bevis-Lacey) had the audience booing throughout including a dramatic (spoiler alert) death! Dwayne Pipe (Kimberly Jones), Wayne Bow (Alison Pugh) and Sherriff of Nottingham (Colin Carter) all portray evil-villains well and their ‘questionable’ accents add to the comedy! Will Scarlett (Beth Bowers) delivers her lines with focus and Mr Pendergrass (Kevin Bowers) is lovable as the on-stage-stage-manager although his stripping scene whilst funny, did seem a little mis-placed.

A mention must go to Grandfather and Granddaughter duo: Little John (Pete Burton) and Extra Little John (Ella Cannavo). The pair were naturals on stage with some witty one-liners and had the audience fooled into thinking they were audience members when they find themselves in the action – great direction here from Adrian Barrett!

Sterling effort from the chorus (of only three people). A particular favourite moment was watching them ‘clean’ the stage during the song ‘Under Pressure’.

The cast had a total of only 15 people, and they had the audience in stitches with jokes and slap-stick humour. Pace in the second half could have been a little quicker but this is likely to pick-up throughout the run. A few opening night nerves showed in some cast, but this did not detract from an enjoyable and traditional evening of Pantomime! Oh no it didn’t!

The Bishopstoke Players used no microphones, but every song and line could still be heard due to the size of the venue. Lighting complimented the production as did the convincing costumes. A real sense of community is felt here as the audience enjoyed a hilarious sing-along, the cast really did have the audience in the palm of their hands!