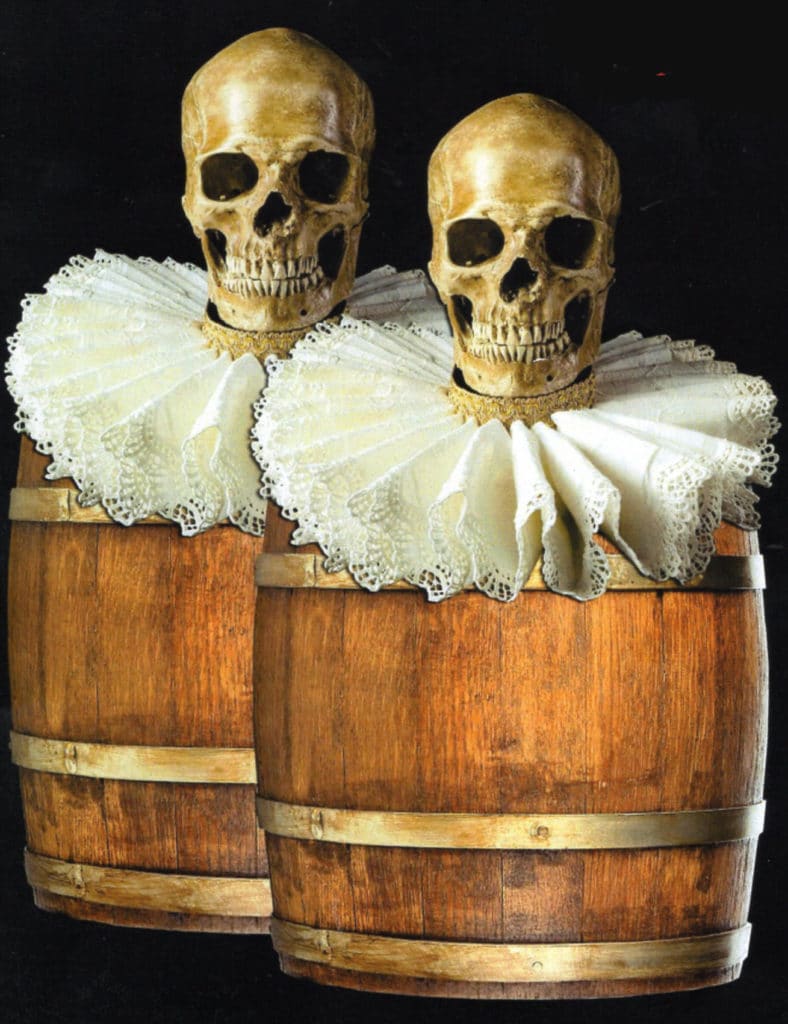 With corpses littering the stage during the final scene of Hamlet, the mention of two more deaths passes almost unnoticed, but it is this line that Tom Stoppard took as the title for his first major play, which had its London premiere fifty years ago this year. It follows the lives of the two title characters more or less during the action of Hamlet, so at the start of the play they are on a journey; its destination turns out to be Elsinore, where they are charged by Claudius to help his troubled nephew/stepson and their old schoolfriend, Hamlet. They find themselves caught up with the troupe of players who perform the ‘play within the play’ in act 3 of Hamlet, an important development as it allows Stoppard to explore the power of art and how far it can reflect reality and, from there, issues such as identity, the nature of death and the fundamental existentialist conundrum of why we are all here in this absurd world, where the only inevitability is death.

The structure of the play allows a lot of directorial discretion and Grae Westgate takes full advantage. Most notably, he has cast women in the roles of Rosencrantz and of the young boy, Alfred, which rather closes off the theme of homo-eroticism which is an undercurrent in the original play. But he makes good use of the stark set and gives full value to the considerable potential for comedy.

In his programme note, Grae Westgate refers to ‘Stoppard’s meandering ponderings’, and there is more than a whiff of self-indulgence in some of the writing. By no stretch of the imagination is it an easy play, and a reasonable knowledge and understanding of Hamlet is pretty essential. It helps, of course, if it is well done, and that is where this production scores highly: the watchability of the performances more than compensates for the occasional longueur in the writing.

The two main protagonists are very distinct characters, and the difference in gender helps to emphasise this. Guildenstern is the more imaginative and cerebral, questioning almost everything going on around him, but he is ultimately ineffectual and Hamlet has no trouble running rings round him. Daniel Withey brings great energy to the role and conveys the vulnerability of someone who is making an honest but doomed effort to understand the nature of existence.

Rosencrantz is much more laid back and inclined to let events wash over her. With her expressive eyes and mobile face, Roseanna Bowen allows her character to emerge as really rather likeable even if, like her chum, she is ultimately confused and lost. At a number of points, the characters speak actual lines from Hamlet, and Roseanna delivers the Shakespearean verse noticeably well.

There is good chemistry between the two lead characters, and their quick-fire dialogue has a pace and believability that can only come from a combination of talent and conscientious rehearsal.

The Player is a part of rare potential and Topher Lynn make the most of it. By turns camp, threatening, mischievous, knowing and mysterious, he dominates the action when he is on stage. In many ways he is the key figure in the play, and this consciously over-the-top performance measures up to the importance of the role.

Hamlet, by contrast, is a rather wishy-washy figure, but Matthew Miles Chambers does what he can with him. The support of the rest of the troupe of players is important, and Sally Beames, Kim Fletcher, Simon Meredith, Deanna Penn and Reg Beckley let no-one down.

Rosencrantz and Guildenstern Are Dead is playing at Bournemouth Little Theatre on 15 and 16 September, Forest Arts Centre in New Milton on 23 September and the Marine Theatre at Lyme Regis on 14 October.