W S Gilbert liked to poke fun at fads or fashions of the day and Ruddigore, which opened at the Savoy in 1887, most definitely cocked a snook at the Victorian passion for melodrama with its villains, twee heroine, madwoman and so on; unfortunately, it was not overly popular with the public and closed after only 288 performances. Nothing has really changed over the years and it remains a fair way down the list of G&S favourites, so all credit to this society for choosing to perform it rather than going for a sure-fire box office success, and for including the longer finale and the oft-cut but beautiful ‘The battle’s roar is over’.

Sarah Vandervelde’s fairly traditional production is slightly ‘curate’s egg’ at times, with both sheer ingenuity and a couple of cringe-making moments. The ingenuity comes particularly during the overture, played by a superb orchestra under the glowing baton of musical director Ieuan Davies. To those without an in-depth knowledge of Ruddigore, it will seem at the very least well-choreographed as characters silently act out scenes; to those in the know, most of those scenes relate to the specific music that is playing, and I particularly loved Sir Rupert Murgatroyd burning a witch at the stake, with a very realistic flame effect adding to the drama.

And the cringe-making moments? The duet between Mad Margaret and Sir Despard, ‘I once was a very abandoned person’, benefits not at all by the addition of a person in a suit of armour jigging about behind them and totally distracting from what is usually a lovely number, while the ancestors’ ‘Painted emblems of a race’ is enhanced, numerically speaking, by a number of women dressed as – what? Hags, I suppose. I 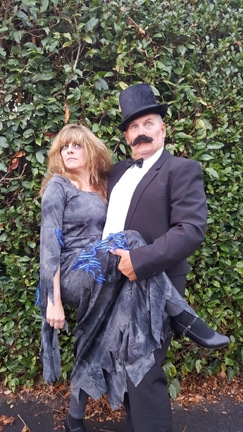 could understand the reason for their presence – the society, like many others, has very few men – but it would be better for them to be behind the men rather than in front, as the audience can hardly see the ancestors at all. The scene is beautifully lit, but this comes at a cost, as the moving lights are very visibly present on the stage for the entire show and their modern look is totally incongruous when the setting is clearly Victorian.

On the whole, though, this is an enjoyable production with some cracking choreography from Lucy Kelleher, good singing, plenty of smiles from the chorus and a great line-up of principals. Long-time society regulars Christine Eastwood (Dame Hannah), Brian Oliver (a slightly older than ideal Robin Oakapple) and Mark Ward (Sir Despard Murgatroyd) always give good value for money, and Susy Davies really gets into character as Rose Maybud, as do newcomers John Rimell (Richard Dauntless) and Dennis Osment (Sir Roderic Murgatroyd). There is a gorgeous cameo, too, from Bob Savage as Old Adam Goodheart, and I loved the way he has a trainee, Young Dan Goodheart (Daniel Rimell). Last, but absolutely not least, Julie Gower is a wonderfully manic Mad Margaret with mesmerising stage presence and, or so it seemed on opening night, an uncanny ability to recall a word that had not yet been thought up…!

There are further performances on 29 and 30 September, both starting at 7.30.