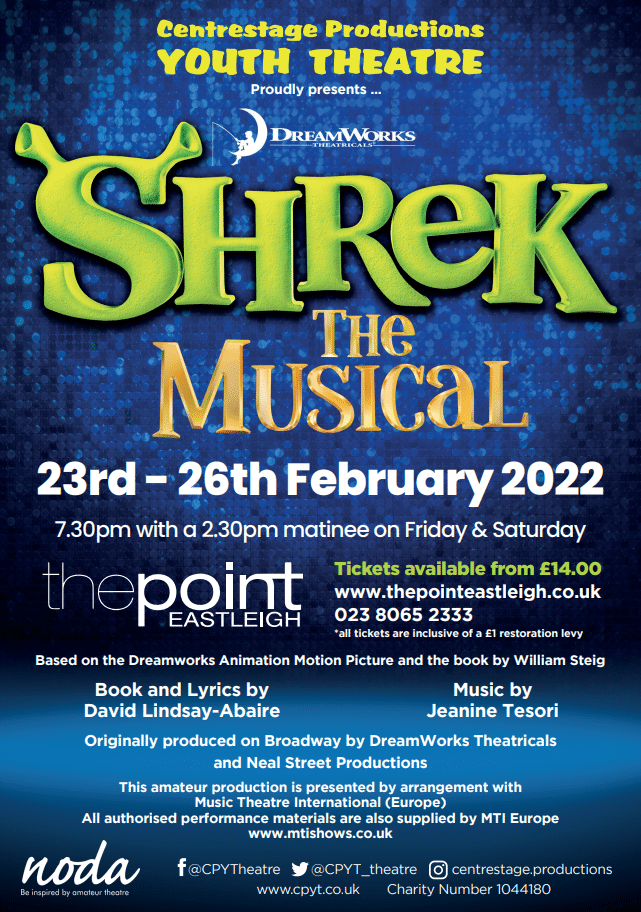 Centre Stage Productions Youth Theatre (CPYT) provide an opportunity for aspiring youth performers of all age groups and abilities to showcase their talents. Shrek is a great choice. The musical and fairy tale conventions demand a largesse of spirit and enterprise that the CPYT team grasp. Everyone is welcome. Everyone is included. Love is what you make it. Unless you are Lord Farquaad. Even the Dragon gets away with it. I am told Shrek does better belching than me.

It’s a very enjoyable rollickingly daft show.  Of the performers the women had the edge on the first night – only just. They propelled Shrek forward with energy and vocal talent. Summer Hughes (Princess Fiona) is a wonderfully joyous spirited creation. Alicia Lambert (Dragon) belts out a tune with tiny dragon wings that turned up the scale on the Princess’ rescue. But let’s not forget the rescuers!

Harry Taylor (Shrek) and Luke Sharples (Donkey) have a splendid line in pathos and lovelorn humility that really brings the various character journeys together at the end (even if the Donkey gets the Dragon?). They do have an opportunity to go up a gear on the Act 1 slapstick comedy numbers which sometimes didn’t feel as ‘sure-hooved’ as the script. Tyler Convery (Lord Farquuad) is a creation of dastardly, camp, monstrousness that is deliciously horrid. It’s a good job the young have bendy knees as Tyler has been given ‘short shrift’ (the show rubs off on you like that).

With a cast of thousands (ish), it really is impossible to call out every performer that contributed to this crowd-pleasing foot tapping delight. There was so much going on, so many different performers switching roles. The whirl of energy and enjoyment this created is much appreciated. It may be the first taste of the footlights or the last at CPYT. All should feel very proud of putting on a fantastic show.

The band, under Nigel Finch, is awesome. An ‘actual’ band. It probably had more real instruments than a Cameron Mackintosh show. A French horn in the pit? Whatever next? Michael Mullen directed and managed the smorgasbord of scenes, numbers and effects with an eye on using all the stage and all the resources to hand. There is so much going on in Shrek that defining the torture of a gingerbread man, dragons, or a pint-sized weightlifters hair piece nightmare and making it look good is a tough job. Mike delivered, as did Choreographer Kiera Moorhouse, whose steps were sharp and achievable for her dancers. Oh and nice ‘Rat Tap Dance’, Hannah Shearman.

CPYT deliver a life-affirming, zippy and enjoyable production. Everyone is included, they are all having a go and putting on a show. The excitement, talents and energy are evident, and it lifts an appreciative audience. I have a feeling this show will sell out faster than it takes to cook a gingerbread biscuit. On at The Point, Eastleigh until Saturday 26 February. Don’t be an ogre, go and see it. Or perhaps DO be an Ogre – and go and see it. Nothing wrong with being an Ogre.