The first problem a director faces with Snow White is what to do about the dwarfs. Using children is limiting, but Highcliffe and the surrounding area presumably do not have more than an average proportion of vertically challenged would-be actors. To find out how directors Paul Barrington and Charles Michael Duke solve the problem, you will have to see the show, but suffice to say that local gardeners may find it difficult to buy a pair of knee-pads for a while. It works very well and adds a lot to the comedy, even if seven slowly shuffling dwarfs do make for some rather drawn-out exits.

The fun that the dwarfs are evidently having is an important part of the appeal of the show. They sing effectively as an ensemble, too, and are well led by Pete Whitaker as a rapping Dizzy (innit). All the names have been somewhat adapted from the better-known Disney versions: Sniffles, Snoozy and so on.

A slight oddity is that the pantomime dame is played by a woman – and a very good job Christine Duell makes of it. Could it be that when a man plays the dame, he tends to try just a bit too hard? As you might expect, Christine seems more comfortable in the skin of the character than a man would, and it is actually a more effective performance for it. As her sidekick, Handy Andy, Malcolm George establishes a strong connection with the audience, despite having to deliver some of the worst jokes on the pantomime circuit this season. They should both beware of ad libbing loudly over each other.

Georgina Smith plays Queen Malevolent with a commanding presence that attracts a satisfactory volume of boos, while Mark Weldon overcomes an uncertain Northern accent and an ill-fitting wig to make rather an endearing Lord Chamberlain. Charlotte Williams as Snow White proves that the mirror does not lie, acts well and sings sweetly, despite an occasional tendency to fall off the note slightly. Her beau, Prince Edward (not that one), is robustly played by Kara Tompkins in a pair of high boots that leave just enough fishnet-clad thigh to be slapped in moments of high emotion. 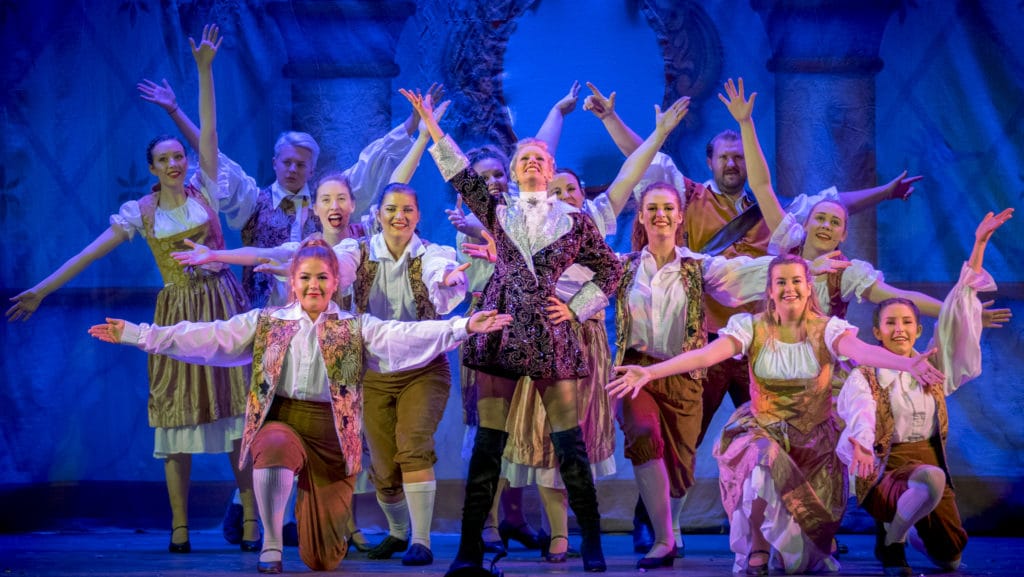 The chorus is all female, although joined at times by Stanley Smith, who doubles as a camp Spirit of the Mirror, and Adam Venables, a virile and eventually repentant Huntsman. The chorus singing is excellent, a credit to musical director Stuart Darling, who also produces a very good sound from the six-piece band. However, it is if anything surpassed by the dancing, choreographed by Charlotte Starr with Emma Barrington as her assistant. It reaches a genuinely high standard of creativity and energetic execution, especially in the Proclaimers’ ‘500 miles’, while the tap shoes disguised as rats will be long remembered.

The staging includes striking backcloths and excellent costumes. If one aspect invites criticism, it is the script by Stephen Duckham. The dialogue is not strong, even by pantomime standards. In the best pantos, all the traditional elements integrate naturally into the flow of the story; here, the slapstick scene in the kitchen and the obligatory ‘Behind you’ caper seem to be rather bolted onto the rest of the show and, maybe for that reason, don’t really work.

That is to take nothing away from the hard work and talent that HCP have brought to the show, which deserves its place in the company’s long and distinguished record of successful pantomimes.