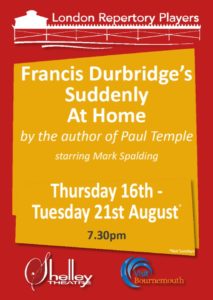 Theatre, of course, can do all sorts of things; provoke, explore, enlighten, expose, attack, celebrate, challenge … and so much more. Sometimes, as in this, the third play in London Repertory Players’ Summer 2018 season, it is content to entertain, as valuable a function as any. All are important functions; all need to be done well. This production succeeds.

Francis Durbridge is probably best-known for his radio drama series based around fictional crime novelist and amateur sleuth, Paul Temple, which originated in the 1930s, ran until the 1950s and have been revived in recent years. Durbridge also wrote novels, for television and for the theatre, earning a reputation as a master craftsman and storyteller specialising in crime.

‘Suddenly at Home’, his first stage play was given its initial performances in 1971 but is here revived with a 1980s’ setting. The staging is simple but effective and the structure and characters hold up well almost 50 years on. Focusing on Glen Howard and his wife Maggie, its action all unfolds within the living room of their flat.

Mark Spalding, as Glen, is an actor whom I’ve now seen in a number of roles, each of which he has brought to life with deceptive ease (and those who tread the boards know that the easier it looks, the more deceptive and to be admired that is). There is no spoiler here in giving away who did it, the audience’s engagement focusing on whether or not he can get away with it – and on whether or not, indeed, all is as straightforward as it seems. Mark Spalding provides this production with the solid and dependable hub essential for its success, completely believable throughout.

Surrounding and complementing his central performance is ensemble playing of very even quality: each of the actors brings out the key features of his or her character in an unfussy, plausible way, from Victoria Porter’s nicely-observed and neurotically driven Sheila Wallis through to Musa Trevathan’s and Neil James’ methodical and unhurried Remick and Appleton. As Maggie Howard, Claire Fisher is quick and effective in establishing both her own persona and the nature of her relationships with her husband, Sheila and her sister, Helen Tenby. As the latter, Kirsty Cox gives a delightfully natural and a strong performance, one of which I would have been happy to have seen even more, had the writing required it. All of the eight-strong cast contribute to the production’s overall success.

If, as I do, you enjoy, at times, sitting down in a comfortable chair, with an absorbing book to read, take the opportunity to book tickets and go along to Boscombe’s Shelley Theatre while ‘Suddenly at Home’ continues in performance until Tuesday, August 21st – because that was the feeling with which I, clearly in common with the rest of a very good house, came away: played with pace and assurance, the production seemed to fly by, prompting laughter, delighted surprise (or affirmation) and absorbed silence in pretty equal measure.

From Thursday, August 23rd, L.R.P. complete their season with a run of Richard Harris’s psychological thriller ‘Dead Guilty’, which features another regular member of the London repertory Players, Al Wadlan. Director Vernon Thompson has proved repeatedly to be an accomplished interpreter of a range of plays, notably with crime and suspense at their hearts, which brings the promise of as strong an end to the season as has been the case so far. It really is our good fortune to have repertory theatre of so consistent a standard so close at hand.