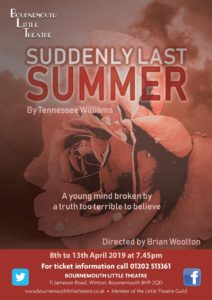 If you have never been to a production at the Bournemouth Little Theatre, it is an experience not to be missed. I know I have written about it before, but in this – their 100th anniversary year – it seems time to mention it again. If I tell you that since 1975 it has been above a garage in Winton you might envisage something rough and ready and possibly rather amateurish, but that it most emphatically is not – it is a proper theatre, with tiered seating for 90+, a full, professional lighting rig and a charming green room and bar. It offers an intimacy that you don’t get in a larger venue and there is an enthusiastic membership of the Bournemouth Little Theatre Club and lots of regular faces. Tickets are always only £10 (£5 for members) and there aren’t many places where you can get a decent evening’s entertainment for that price. That’s enough of the plug … now on with the show.

Until I watched tonight’s performance, this intense, one-act, psychological drama from 1958 was not one that sprang to mind along with Tennessee Williams’ better known and award-winning works – but that will change from now on.

Angela Whyatt, as the snobbish Mrs Venable, maintains a good American accent throughout her rambling opening monologues as she expounds to the patiently attentive Dr Cukrowicz (Ryan England) the dubious merits of her late son, Sebastian. Her own manipulative nature becomes apparent as both we and the doctor realise that her generous support for the doctor’s pioneering research will only be forthcoming if he agrees to progress with a risky lobotomy of Mrs Venable’s niece, Catharine, to either prevent her from continuing to “babble” a scandalous story about Sebastian’s demise, or at the very least to discredit it absolutely. There is an effective and rather cinematic use of background music to counterpoint some of the dialogue here and it reappears later.

We see that Catharine’s mother and brother (Carole Allen and Nicholas Tyrrell) have their own venal interests ($50,000 dollars each) in placating the old lady’s anger and we see them as they try to persuade Catharine to change her story.

At the interval we, the audience, are no wiser as to what really happened in Cabeza de Lobo. In the second half, however, Catharine (Dina Berlyn) takes centre stage. The lighting fades away elsewhere, leaving her highlighted. The dramatic background music returns as she begins the truth-drug-induced stream-of-consciousness recollection of what happened on that eventful day last Summer. To recreate a stream-of-consciousness from a script is no mean feat; the odd stumbling over words, while probably accidental, was entirely in tune with this form of delivery and we, the audience, were truly gripped by the exposition – to its final, shocking, conclusion.

The direction by Brian Woolton not only introduces the music, which is effective while not being obtrusive, but also has some of the dialogue shouted – notably by psychiatric nurse Sister Felicity (Rachel de Courcy Beamish) and Dr Cukrowicz. The performances by Angela Whyatt, as Violet, and Dina Berlyn, as Catharine, are really a tour-de-force of British amateur acting and with a fine supporting cast BLT have really taken this one to the pinnacle.

See it if you can, it’s on every night this week; ends Saturday.