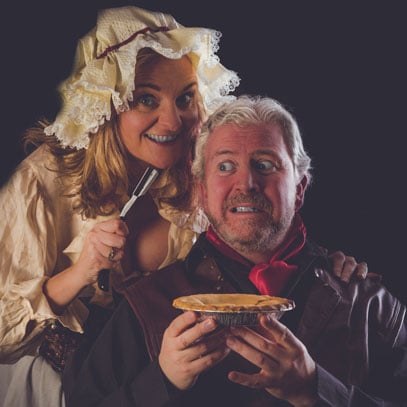 ‘Attend the tale of Sweeney Todd’ – so starts Stephen Sondheim’s 1979 musical thriller. The tale of the famous Fleet Street barber dates back to 1846, when he appeared as the fictitious villain in the Victorian penny dreadful, ‘The String of Pearls’.

As a composer, Sondheim has written some fairly complex musicals, and any amateur company choosing to take on Sweeney Todd needs to rise to the challenge or risk making a complete hash of it. Thankfully, Winchester Musical and Opera Society do rise to the challenge admirably. David Tatnall’s direction sees the audience submerged into a vaudeville experience, bringing the drama right out into the auditorium and involving the audience in the action.

Under the excellent musical direction of Martin Paterson, the nine-piece band is situated on stage, above the actors, and their sound quality is first-class. There is always a concern about having the band in such a position – if the MD cannot see the action on stage and things start to go wrong, then it usually ends up as a major wreck. Thankfully, this was not the case for WMOS, and the hours of rehearsal clearly paid off.

Christina Finn’s choreography dovetails beautifully with the melodramatic music, and each member of the cast, whether principal or ensemble, really gets into character. Adrian Hickford takes on the title role. Sweeney is an immense part, vocally complicated and emotionally tiring, offering the actor a fantastic challenge. Adrian does not disappoint – he is vocally strong and very believable as the revenge-obsessed barber. Mrs Lovett is played with equal menace and affection by Katie Hickson, adding some lovely comic moments throughout as she attempts to wheedle her way into the affections of the demon barber, whose heart is set only on revenge over the callous Judge Turpin, acted with evil pomp by Peter Barbour.

Amongst the other roles there are strong vocals from Annie Tatnall (beggar woman), James Rosser (Anthony), and Rosa Sparks (Johanna). Special mention must be made of Peter Lucas – by far the youngest member of the cast – whose portrayal of the orphan Tobias as he becomes embroiled in the illicit operations of the barber and pie shop is delightful.

This is an excellent amateur production of this beautiful but complicated musical, and although for me the comedy injected by the director isn’t always warranted, it is a brilliant piece of theatre. Just watch out if you are offered a pie!