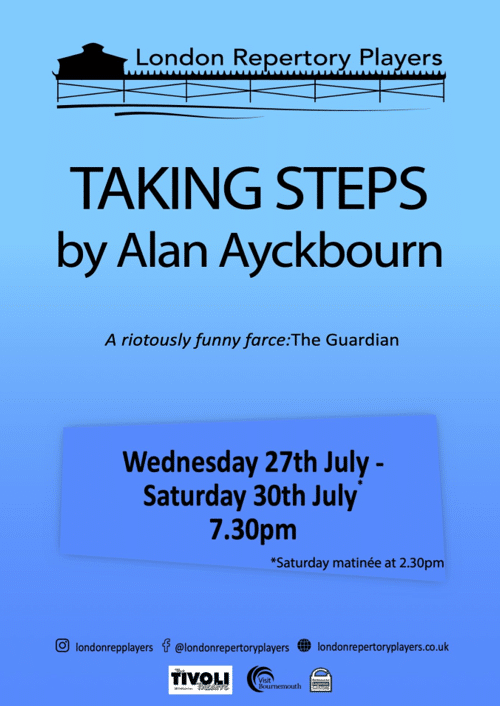 For years, weekly rep provided a staple theatrical diet: one company, in one venue, presenting a different play each week. Towns and cities across the country had their own such companies. Those days are, almost entirely, long gone: a shame as, despite some “skin of the teeth” productions, rep brought theatrical diversity for audiences and gave their first opportunities to many actors who went on to become hugely successful.

London Repertory Players, under Vernon Thompson’s guiding hand, began bringing productions to Boscombe’s Shelley Theatre in August 2016. Having played a single production at Wimborne’s Tivoli Theatre last year, they have returned to the latter venue with five productions from now until August 25th.

The season has opened with Alan Ayckbourn’s Taking Steps, still alone among his plays in being designated by him as “a farce” although its comedic elements are, arguably, equally in evidence in many of his other works. Taking Steps itself remains within the bounds of plausibility while exploiting familiar elements of the genre, as this production demonstrates, in a way that is very, very funny.

Two mutually-supportive features of Ayckbourn’s craft are meticulous plotting and a delight in exploring staging possibilities. In Taking Steps, the action is set, often simultaneously, across three floors of one house – but played on the same level, the actors miming ascending and descending the connecting staircase. Played with conviction, as here, it wins the audience’s acceptance from the outset and enables Ayckbourn the director and cast to share what is happening on each floor and how those on one floor are reacting to, for example, footsteps and voices heard from above or below.

The house in question, an older building with a preservation order and, apparently, with its own resident ghost is about to be purchased by current tenant Roland, his fortune made through buckets. Unashamedly proud of his success, predisposed to a tipple (or many) and not long married to dancer Elizabeth, he is here realised very effectively by Neil James, whose performance includes an energy, a susceptibility to alcohol and a range of emotional highs and lows that comfortably resist cliché.

Ayckbourn also delights, within a cohesive and (just) credible plot, in different combinations of characters, constructing a matrix of relationships that work in themselves and in combination with others. Taking Steps opens with a duologue between Mark, soporific, aspiring owner of a fishing shop, and his sister, the aforementioned Elizabeth, the latter about to leave Roland. Between them, Al Wadland and Victoria Porter set the standard for the rest of the production, making the most of Ayckbourn’s script, the situation in which each finds him- or herself, and their conflicting priorities. Both sustain highly enjoyable characterisations throughout.

Set against Neil James’s bulldozing Roland – and just about all others he encounters – is Tristram, as ill-suited a solicitor as could be imagined. The character could easily be over-played but Joseph Prestwich consistently convinces in his portrayal of the hapless, eager but desperately tongue-tied representative of the law firm within which he is apparently a junior partner. More than merely completing a strong cast are Mitch Capaldi as Leslie Bainbridge, the builder approaching desperation in his efforts to complete the sale of the house, and Hepzibah Roe as Kitty, Mark’s erstwhile fiancée who, having jilted him for a Cypriot waiter and fallen foul of the law, now re-enters his life. Both give enjoyable performances and, while Kitty features less within the play’s dialogue, her presence is, throughout, important: Hepzibah Roe makes the most of the opportunities to create humour simply by her efforts, constantly frustrated by others’ untimely comings and goings, to move about the house – or to escape it entirely.

The only disappointing feature of the opening night was that there were not more in what was an encouraging and delighted audience. Vernon Thompson’s assured direction, the ensemble playing – something important to Ayckbourn from the outset but lacking from its first West End production, the audience’s laughter throughout and their enormously appreciative applause at the end provided an encouraging opening to what promises to be a diverse and rewarding season. For those who have had reservations, post-lockdown, about resuming theatre visits or those not previously regular theatre-goers, this offers a reminder of how much enjoyment can be had from accomplished writing, direction and playing. For anyone in, near or within easy travelling distance of Wimborne’s delightful Tivoli Theatre, it is well worth seeing.

Taking Steps runs until Saturday 30 July. Thereafter, London Repertory Players present: Francis Durbridge’s classic thriller The Small Hours; Noel Coward’s comedy Fallen Angels; I Have Been Here Before, one of J. B. Priestley’s intriguing ‘Time’ plays; and Mike Leigh’s Abigail’s Party, the suburban tragi-comedy first performed in 1977 and still one of the finest, funniest yet most biting plays of the last fifty years.