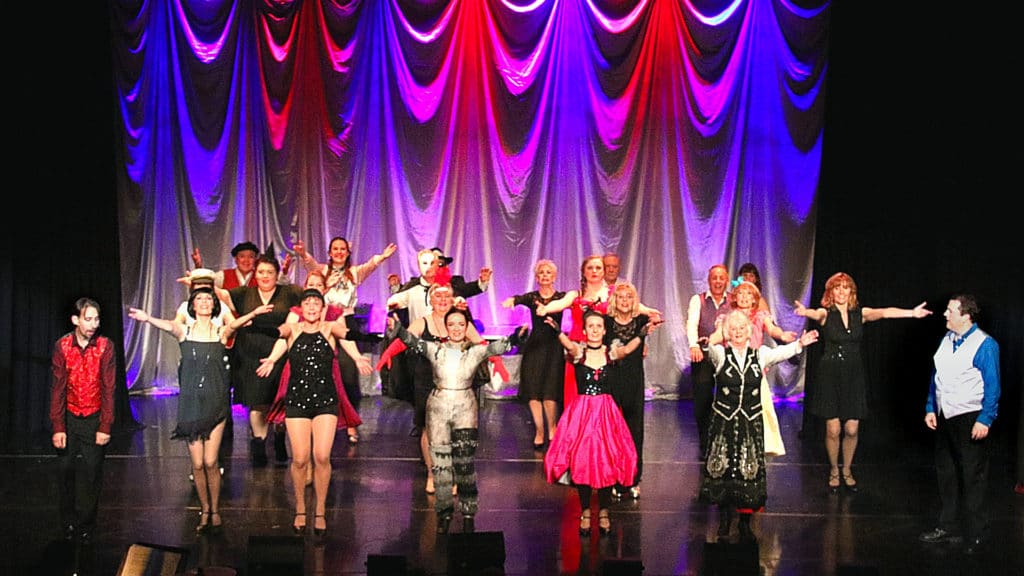 When I reviewed this society’s Sounds of the ’50s and ’60s just a year ago, I regretted that there were only two performances, both on the same day. Exactly the same thought struck me this year: there was so much talent, skilful direction and sheer hard work on show that it seems a pity that it was all over so quickly. On the other hand, a slightly disappointing audience for the evening performance suggests the reason why; this is one of the best musical theatre companies in the area and it richly deserves greater local support.

As well as some outstanding individual performances, the chorus made a terrific sound in full numbers like ‘Oklahoma’. The men held their own, but as usual, the ladies outnumbered them and there were some wonderful ladies’ chorus numbers, including ‘Bless our show’ and ‘Raise your voice’, both from Sister Act, which respectively opened and closed the first half.

The order of items had clearly been thought out with care by artistic director Roy Joseph and director and choreographer Suzi De Villiers, and the transition from one to the next was slick. The choreography was attractive and stylish; the cast get full marks for remembering it all and performing it with such polish, but Suzi was not afraid to let them just stand still and sing, as in a strong rendering of ‘Tomorrow’ from Annie. The staging made clever use of traveller curtains, and the lighting and sound were generally spot-on. Just occasionally, the otherwise excellent three-piece band under musical director Lee Redwood drowned out the singers; unfortunately, one such case was ‘The song that goes like this’ from Spamalot, where hearing the words is more than usually important.

In a production based on songs from the shows, in most solos it is not enough just to sing well – there has to be some acting as well. The cast had clearly thought about gestures, movement and facial expression, with Julie Sissons in ‘Don’t tell Mama’ from Cabaret and Vanessa Wassell in ‘Not for the life of me’ (Thoroughly Modern Millie) leading the way.

There are a couple of problems with songs from the shows. One is context; for example, ‘Seven and a half cents’ is a great song, but if you’re not familiar with Pajama Game, you may wonder what it’s all about. I myself have hardly heard of the musical Anastasia, so the two numbers from it left me unsure what was going on. This doesn’t matter if the song is good enough, but the other problem is that a song that is suitable to be included in a show is not necessarily strong enough to stand on its own. It was good to be introduced to less well-known numbers, but one could see why some of them were less well-known.

A few hours after the curtain came down, which songs stay in one’s mind? ‘Hello, young lovers’, simply but beautifully sung by Selina Rumbold, is one, ‘Slipping through my fingers’ by Julie Sissons another. Hermione Mason sang ‘Journey to the past’ from Anastasia and ‘A life I never led’ (Sister Act) impressively, as well as proving herself no mean tap dancer when leading the girls’ tap team in ‘Forget about the boy’ (Thoroughly Modern Millie). Heather Pretlove showed her versatility and talent in three very different songs: ‘People will say we’re in love’ (Oklahoma!), ‘I dreamed a dream’ (Les Mis) and ‘As if we never said goodbye’ (Sunset Boulevard). The last was excellent, easily the best of the three; the audience was spellbound by ‘I dreamed a dream’, but I wonder if that had more to do with the song – always a winner – than the interpretation, which I personally found unconvincing.

Also impressive was the confidence of Jemma Cable in leading the chorus in ‘There ain’t nobody here but us chickens’ from Five Guys Named Moe in a great opening to the second half. John Bounds showed off his lovely crooner’s voice in two numbers from Jersey Boys: ‘My eyes adored you’ and ‘Can’t take my eyes off you’. The duet, ‘If I loved you’ (Carousel) by Sharron Pearcy and Phil Redgrave was genuinely touching.

A most enjoyable evening, and this excellent society’s production of 9 to 5 in June is something to look forward to.