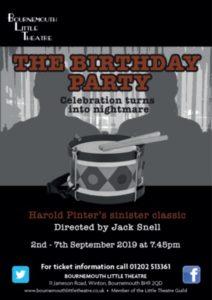 Bournemouth Little Theatre is tucked away in a Winton side street on the upper floor of garage premises and, with limited external signage, it’s not the easiest place to find for anyone who’s visiting for the first time. On the other hand the unconventional street setting and narrow entrance door, more akin to a Soho Nightclub, simply adds to the occasion of seeing what promised to be an edgy play.

Harold Pinter has had an enormous influence on British Theatre and The Birthday Party is one of his most performed plays. It had its debut in 1958 and was Pinter’s second full-length play. At that time, it received mixed reviews, but is now considered to be a classic of the modern stage. In the day, respected Critics labelled the play as a “Comedy of Menace” and also “Theatre of the Absurd”, but irrespective of these classifications this is a play with some comedic humour though it is strange and very dark, with an underlying threat of violence and intense foreboding from beginning to end.

Centre stage is the down-at-heel and curmudgeonly Stanley Webber, an erstwhile piano player of dubious character, who lives in a rundown seaside boarding house run by naive Meg and her henpecked husband Petey. Meg believes it is Stanley’s birthday and has bought him a present, which is delivered first thing in the morning by the promiscuous Lulu. Stanley strenuously denies it is his birthday and is annoyed by Meg’s insistence that it is. He becomes more frustrated and alarmed when he is told two strangers, Goldberg and McCann, have taken some rooms for the night. It becomes immediately clear that Goldberg is the “brains” and McCann the “brawn” in this sinister duo. On hearing from Meg that it’s Stanley’s birthday the new guests decide to hold a party that evening, against Stanley’s wishes. During the afternoon and at the party itself, the tension and the atmosphere of menace intensifies, which gradually reduces Stanley to a non-communicative quivering wreck and eventually triggers his complete mental breakdown. The following morning, in the aftermath of the party, Stanley is taken to an unseen character, Monty, who (according to Goldberg) can treat him for his affliction…

The initial mixed reviews of the play in 1958 might well have been due to the script having a series of rapid exchanges of incoherent dialogue between Goldberg and McCann as they interrogate Stanley, making it difficult for the audience to follow the narrative. The script is also littered with deliberate ambiguity and contradictions aplenty to add to the confusion. The effect of all this is to leave the audience unsure about what it is that Stanley has done that warrants the attention of Goldberg and McCann (and Monty).

Fans of Harold Pinter’s plays will no doubt be familiar with this technique, but other people might well find it something of a challenge. Even so, the hugely experienced and talented cast skilfully portray their parts as believable characters. They deliver their lines with good timing and at the right pace to extract the moments of humour and to build up the suspense as the play develops to its climax. Lindsay Jones gives a stand out performance as the snobbish and eloquent Goldberg, with complementing support from Alan Dester as the tough guy McCann. Issy Coombs is first-rate as the likeable, insecure and motherly Meg; and Noel Davenport is completely at ease playing the part of husband Petey, who wants nothing more in life than a quiet time. Denise King, who returns to BLT as the flirtatious Lulu after a 20 year hiatus, looked and acted the part. Last but not least to be mentioned is David Vinter who provides the unpleasant and disintegrating Stanley with an authenticity that, by the end of the play, engenders feelings of sympathy for the character.

The play is staged in a typical 1960’s dining room, with a serving hatch to an adjoining kitchen, and decor and costumes to match. The lighting and sound is well synchronised with the action.

Apparently this is Director Jack Snell’s last production, after forty nine years with BLT, and he is signing off with another success to add to his list of achievements.

The Birthday Party runs until 7 September.