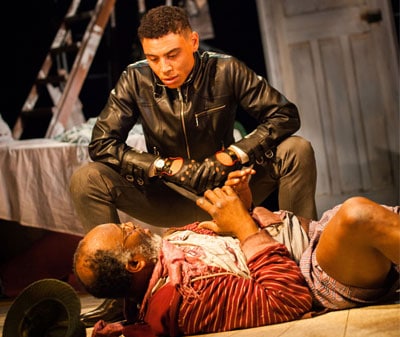 Harold Pinter’s classic has been given a reboot for the modern age and you would not believe that the first performance was first presented in April 1960 from the edgy and classy relevance which Christopher Haydon and his team at the Bristol Old Vic give to this production. An all-black cast bring life, vigour and fluid movement to the Pinter text, making it fresh, relevant and alluring.

A Dali-esque set by Oliver Townsend and team, with hints of Alice falling down the rabbit hole, is beautifully lit throughout by Paul Keogan and arguably equally as mesmerising as the performers who inhabit this strange room of ‘stuff’. The placing of items and the dripping windows all add to the claustrophobia the characters inhabit; the wanting to belong to something, wanting to do something but being held back by their own fears creates an endless circle of non-achievement. The tolling bell and rainfall add to the sense of prison isolation and that something may happen. This gives the play an eeriness and foreboding and ratchets up the tension as Davies, the interloper, tries to hold onto what he is given, while the brothers cannot quite allow him to go.

Patrice Naiambana is marvellously sincere, barely off the stage and leaving the audience emotionally drained by his presence. His reaction to shoes and the smoking jacket are childlike yet empathetic, while his proud reaction to a check shirt, defying his homeless need to accept just anything, is humourful and moving, leaving you to wonder how his Davies character arrived to where he is.

Jonathan Livingstone gives an equally powerful performance as the inviting Aston. His act 2 monologue is spellbinding in its delivery and concept as the lighting fades around him. A hint of lobotomy or some other unethical medical experiment in his recent past reveals more than just a carpenter or plug-fixer, but evidence of achievement in these areas is forever elusive.

David Judge as his younger brother, Mick, matched both his fellow-performers with a nod to peaky-blinders tension and below the surface violence. His adjustable tone of voice, ninja moves and rather scary way he puts on his gloves are of particular note. It is an open stage from the beginning, but he remains totally still in statue repose during the audience arrival, which is quite fascinating.

With themes of loneliness, family, a needing to belong somewhere, almost no place like home, this play is a must-see for lovers of classic plays. The Pinter pause is never quite forgotten, but this play will leave you images and words to linger long in the memory.