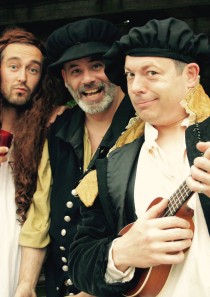 Let’s gloss over the fact that it took three Americans to write the script of this whistle-stop tour through all the plays of our most English of playwrights, and simply be very thankful that they did, because a funnier, more manic evening would be hard to find.

It first saw the light of day at the Edinburgh Festival Fringe way back in 1987, and has rarely been off the stage since. Whether you see it as a homage to Shakespeare or just an irreverent take-off of his work doesn’t really matter; in this year of celebrations to mark the 400th anniversary of the Bard’s death this production couldn’t be better timed, and if it makes those new to his work want to explore further then so much the better.

The fact that the theatre was completely full says much for Arena’s reputation in this area, and Paul Nelson’s frantically-paced production can only have further enhanced it. Part play, part revue and with that ‘fourth wall’ non-existent since the audience is frequently drawn into the action, actors  Simon Meredith, Gareth Richards and Grae Westgate were outstanding and did themselves, and the script, proud.

Beginning with Romeo and Juliet and moving swiftly through a cooking show version of Titus Andronicus and a brilliantly performed rap Othello to the lumped-together comedies, followed by the similarly-treated histories, there were so many laugh-out-loud moments that I began to feel quite weak. I’m sure the cast were exhausted, and the slightly elongated interval necessitated by the fire alarm going off and the subsequent evacuation of the building (all dealt with impressively swiftly by those on duty) must have given them a welcome few minutes more to recover themselves.

Could it get any better or crazier than it already was? Absolutely. Leaving Simon to keep the show going with his rendition of Brush Up Your Shakespeare, followed by almost handing round a card bearing a shortened version of the Sonnets, Gareth had gone off in search of Grae, last seen at the end of Act One leaving the building to avoid having to perform in Hamlet. Once all were safely back on stage, we never did get to read those truncated Sonnets as a full-pelt Hamlet began in earnest – and for the first time in the evening I was mightily glad that I was sitting well away from the front.

While a couple of press-ganged members of the audience went up on stage to enact Ophelia and the state of her mind, and those near the front got a little wet (well, she does drown!), the rest of us were divided into her ego, super-ego and id. It just got more and more manic, with this brilliant evening ending with a final, fast (42 seconds, I think) performance of Hamlet, spoken backwards.

If you missed tonight’s performance you have one more chance to see it, at Hanger Farm Arts Centre, Totton, Southampton, on September 29th.