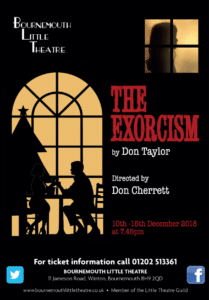 I must admit, when I was asked to review this play, I was a teensy bit confused as to why the group chose to put on a performance like this so close to Christmas. The title doesn’t allude to a festive theme at all, but as it happens there is an undercurrent of Christmas within the storyline, so my confusion was cleared up almost immediately.

The play, written by Don Taylor, follows Edmund and Rachael who have recently moved into their new country home. At ease with entertaining, they invite Dan and Margaret to the cottage for Christmas Day to share food, fun and their home comforts with the pair. As the evening goes on strange things start to happen and the four suddenly have to consider that there may be something menacing coming their way.

Given the title of the play, the general expectation for me was that this was going to be a spooky horror and I was going to go home a little bit unnerved; I was somewhat disappointed. The script is long-winded and very hard going, and could probably have had about 45 minutes taken out of it without ruining the story. There is a huge amount of conversation throughout and not an awful lot of action. There was a very limited amount of spooky goings on throughout the play, and a constant stream of overly deep thought, consideration and rationalisation.

As Dan, Steve Rudge creates an interesting character. He portrays his deep thinking, thoughtful character well, and delivered some of his more amusing lines with ease. He was paired with Martha Jenkins as Margaret, who played his wife very naturally. They had a good chemistry on stage and made a believable pairing. As Margaret, Martha delivered some excellent, very believable facial expressions which created a good, credible character.

Kieron Solf as Edmund delivered an affluent man, with an inner shame of his roots, well and Rachel De Courcy Beamish played the shy and unassuming Rachel with ease.

Given the situation that the characters were in, there were many lines that were delivered with a lot of calm, whereas in reality there would have been a lot more panic. This made it slightly dull in places, and I think if there was more emphasis on some line delivery it could create a more intense atmosphere for the audience.

This is not a play for an individual who would like to sit back and let their mind wander; it is very deep, and you have to pay attention. If you like assessing the inner workings of the human mind and relative theories, then The Exorcism is for you. There are performances from the 11th – 15th of December at Bournemouth Little Theatre.