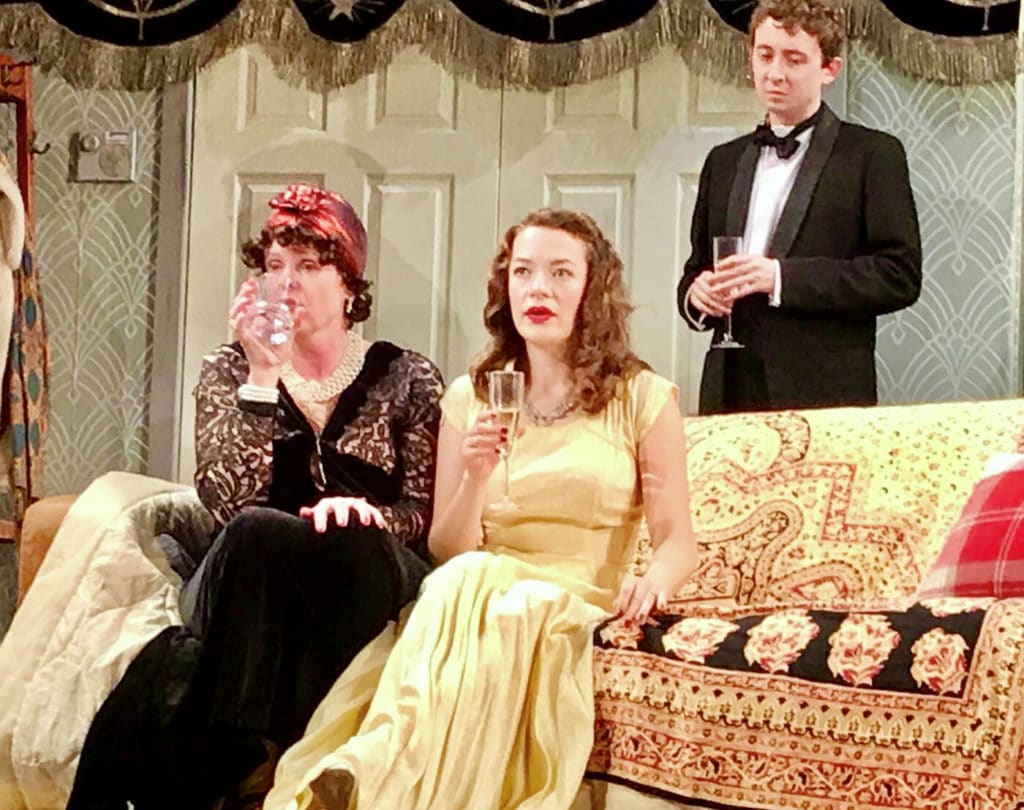 Swanage Rep’s short but extremely sweet season draws to a close with a comedy thriller by American playwright Ken Ludwig. He is perhaps best known in this country for his comedy, Lend Me A Tenor, and his script for the hit musical, Crazy For You, but among his prolific output he is also the author of a book entitled How To Teach Your Children Shakespeare; his extensive knowledge of the subject is possibly the reason why this play’s script is littered with so many quotes from the Bard’s plays – even the title is from Henry V.

It is December 1936 and Broadway star William Gillette, admired around the world for his leading role in the play, Sherlock Holmes, has invited his fellow cast-members to his Connecticut castle to celebrate Christmas. During a recent curtain call he was shot in the arm, so it is perhaps unsurprising that before Christmas Day dawns, two murders have taken place. It is up to Gillette, as he assumes the persona of his beloved Holmes, to track down the killer before the next victim appears. If all this sounds rather serious for a comedy, don’t be fooled, as there are laughs aplenty along the way to send the audience out into the night with smiles on their faces.

One of the joys of having a rep company in town is the opportunity to see the performers play a variety of roles during the season, and having watched last week’s The Secret Garden (unfortunately I missed Yes Prime Minister) it was a real pleasure to go back again. For various reasons I wasn’t in the best of moods, but as soon as the curtain rose, my spirits lifted with it.

There is a lovely, relaxed performance from Keith Hill as the affable William Gillette, with Andrew Piper (Felix), Lottie Johnson (Aggie) and Katherine Mount (Madge) wonderfully over-the-top and actorish as his fellow cast-members. Among them, too, is Jack Mosedale (Simon), who impressed me last week but proved an absolute revelation in this role. This season is his professional debut and I confidently predict that he will go far because he is clearly no one-trick pony.

Fiona Gordon provides many of the evening’s most comic moments in a cracking characterisation as Mr Gillette’s mother, Martha, while Clare Samuels is equally glorious as the very British and not entirely competent Inspector Goring. The final character is the bitchy and evil theatre critic, Daria Chase, played by Nicole Faraday. No-one goes into theatre criticism to win friends so I’ll gloss over Daria’s supposed shortcomings, but Nicole characterises her perfectly.

Finally, a huge shout-out for another brilliant set, great costumes and some alarming but superb sound effects that almost caused me to jump out of my seat on several occasions.

I am told that there already plans afoot for the company to return with an even bigger season next year, and I genuinely look forward to seeing them again with their high-quality productions. In the meantime you can catch the remaining performances of The Game’s Afoot at 7.30 every evening until 29 August.