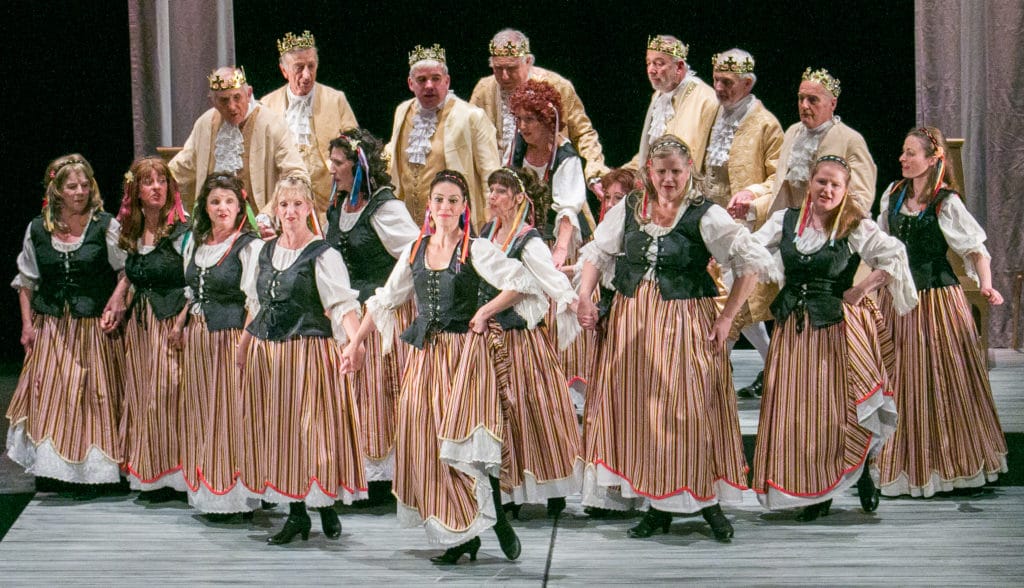 Stylish projected sequences onto hanging boards during the overture tell some of the back story of the principals, showing the infant Casilda growing up in Spain and the infant prince growing up in Venice and then the adult Casilda and her parents journeying overseas to Venice. The projections onto these boards throughout the show are something that D’Oyly Carte couldn’t even have dreamed of, but it is one of the many excellent modernisations of this show. Somebody muttered in my ear that you can hire these in, but the programme credits Set and Projection Design to Kevin Wilkins; whoever did it, it is very good indeed.

The first act, set in Venice, features a simple set of four ‘islands’ with the gaps between them representing the canals of Venice, along and between which the cast moves using a representation of the traditional gondolier’s paddle. I liked the way that the action and the characters switches between the four islands – with occasional slapstick moments as characters appear to almost fall into the canals. There is some nice choreography as characters dance or bob and weave on one platform while others sing on another.

The two Palmieri brothers, the gondoliers of the title, are brilliantly portrayed by Adam Davis as Marco (tenor) and Henry Halewood as Giuseppe (baritone). Belying the oft-cited lack of young men in amateur musical theatre, these two are definite assets to the society. The musical highlights of the show are those songs, such as ‘Then one of us will be a queen’, in which Marco and Giuseppe sing alongside their respective wives, Mehreen Shah as Gianetta and Amy McIntosh as Tessa: perfect harmonies, excellent diction, great entertainment.

In the second act, the four islands are pushed together to form a two-tier dais in the Palace of Barataria – simple but effective staging. The addition of an inadequate number of ladderback chairs creates an amusing spectacle as the courtiers vie for the available seats while Marco and Giuseppe espouse their republican ideals.

Mike Griffiths brings a lot of exasperated humour to the ‘serious’ role of Don Alhambra, the Spanish Inquisitor, and handles the wordy ‘I stole the prince’ and ‘There lived a king’ with experienced ease. More humour is provided by Ian Metcalfe and Amanda King as the Duke of Plaza-Toro plc and his Duchess; Gilbert’s original satire on the Stock Companies Act is still recognisable and amusing today (kerching!).

It seems traditional, certainly with this society, to insert some modern references and humour into Gilbert’s libretto, so we chuckle at the implication that the Spanish Inquisitor is so well informed because ‘he follows it all on Twitter’, or that Marco and Giuseppe have no-one to ‘like their Facebook posts’ – good stuff!

The costumes and wigs are colourful and extravagant, the effects and staging are stylish, the orchestra are superb, the singing is excellent, the choreography is delightful, the sound quality is flawless. I am running out of superlatives. On opening night there did seem to be some issues with the downstage lighting in the second act, it being a bit hit or miss as to whether a character was lit or not, but hopefully this will be resolved in later performances.

A few weeks ago I reviewed a play from the 1970s that I thought was tired and old and not fit for the 21st century, but here is a show from the late 19th century that is as fresh today as –well, something very fresh indeed.

We saw a marvellous show, which continues on Friday 20th and Saturday 21st at 7.30 with a matinée on Saturday at 2.30. See it if you can, you won’t regret it!