Every now and then, a stage production comes along that really grabs you by the throat to leave a lasting impression, and this was one of those occasions. It was all the more impressive because Encore! is still a fledgling company of just two years old, and this is its first attempt at drama, having previously specialised – with considerable success – in revue.

Jimmy Murphy’s 2011 play is originally set in Ireland, an hour or so from Dublin, but the subject matter is such that the setting can easily be moved – in this case to a remote countryside area not too far outside London. Soon-to-be-married Una is holding her hen night at her newly purchased, run-down cottage, with the idea that her friends and future mother-in-law can help clear it out before the wedding, but it soon becomes clear that almost everyone is carrying baggage, not least Una herself, and the chances of anyone living happily ever after begin to look as remote as the cottage itself.

To actually elaborate on the nature of the ‘baggage’ would be to give away too much of the plot, so suffice to say that I completely believed in each of these women from beginning to end, such was the strength of their performances, and there was never a moment when anyone faltered in the delivery of their lines to break the spell of it all being absolutely real.

Frankie Mansfield is every inch the excited, bubbly bride-to-be, Una, holding on to her dream even as the painful truth is revealed – at which point I was almost sobbing with her. Francesca Ozanne catches the character of her seemingly charmed best friend perfectly, making it all too clear that a weekend ‘slumming it’ was not at all what she had had in mind, while Laura Ward is a revelation as other best friend, Kelly. I adored her detailed characterisation and was particularly taken with the scene where she has to overhear a conversation; standing perfectly still at the back of the stage, her expression of shock speaks reams, yet she is saying nothing. 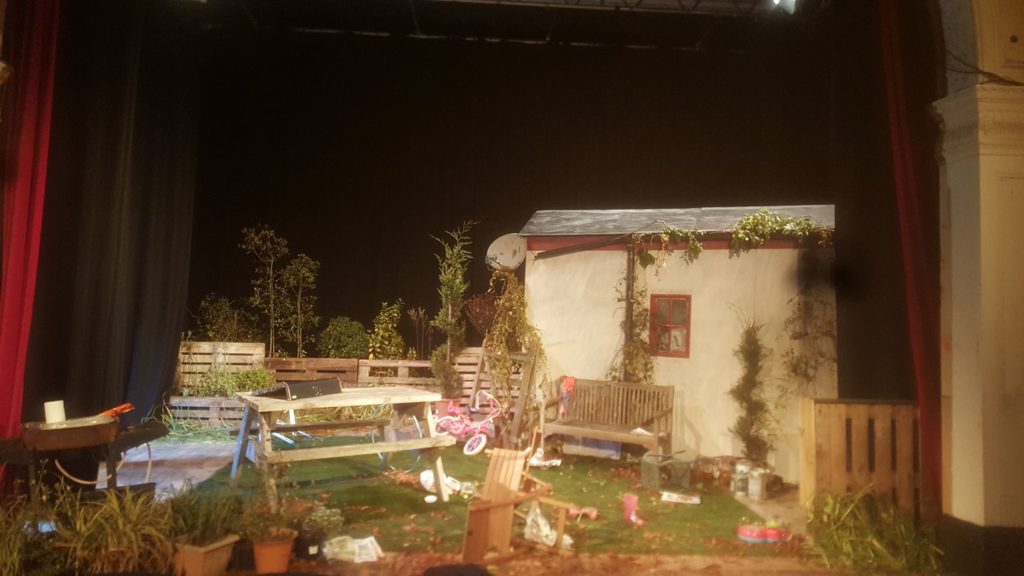 I certainly would not say that the part of bitchy, overbearing Olive, Una’s future mother-in-law, is typecasting for company founder Jo Mansfield, but it suits her down to the ground. Finally, one might have expected that simply directing – extremely well, too – this fine production would have been enough for Barbara Evans, but she also plays the pivotal role of Olive’s friend, Anta, with a very moving, emotional characterisation and a most impressive Irish accent.

I can’t let this review end without mentioning Glanville Noye’s superb set and all the excellent props that give such a realistic look to the production. There is just one more performance: 6 October at 7.30.