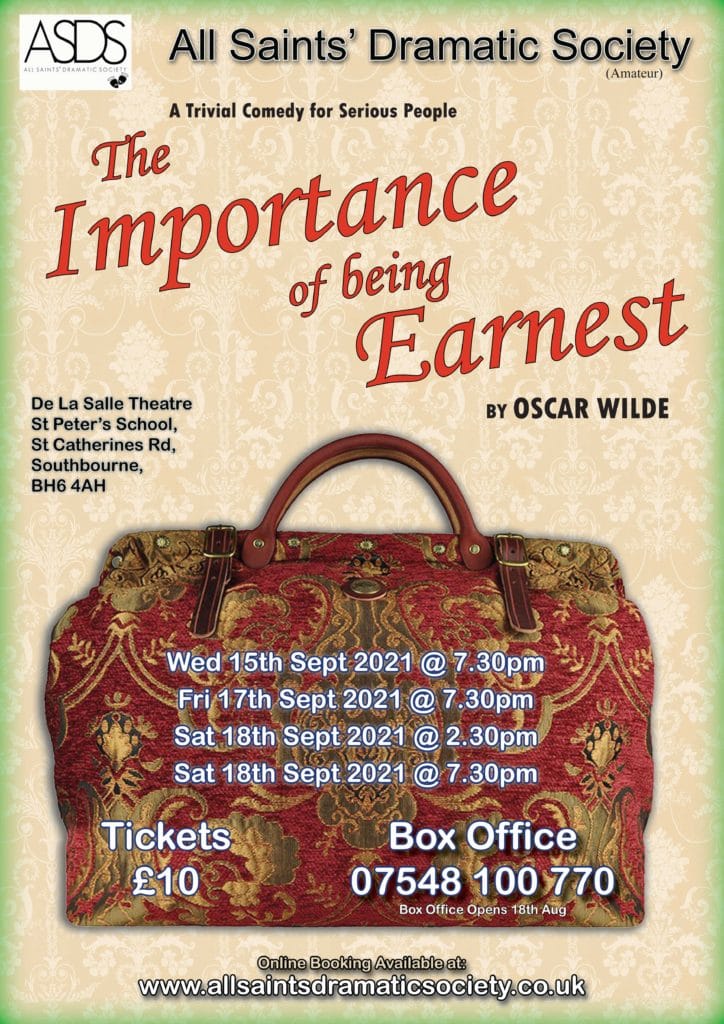 There are few more pleasant theatrical experiences than a good production of Oscar Wilde’s famous play, and this is a good production. You could say it should be, having been eighteen months in preparation (it was originally scheduled for April 2020), but the pandemic that caused the delay also caused difficulties even after the lifting of the more restrictive regulations. Director Peter Nunan asks in his programme note for our patience with what he calls a “skeleton production”. Although there’s no scenery, most of the same furniture does service for both halves and there are no directorial fireworks, it still provides a very enjoyable evening.

How does an actor playing Lady Bracknell convey the imperiousness of the character without doing an impression of Edith Evans? The answer is that Mary Almeida does it extremely well. She is more contemplative and calculating than autocratic. Famous lines like “To lose one parent…”, “The line is immaterial” and, of course, “A handbag” seem primarily a natural part of assessing the scenario confronting her, not as an attempt to belittle her daughter’s suitor. Having said that, she leaves no doubt who is in charge of the situation, even after she has discarded the gorgeous fur stole that makes her entrance an event.

Algernon Moncrieff must be a great part to play because Wilde gave to him most of the jokes and epigrams for which the play is known. Jon Cockeram delivers them to full effect. With his floppy hair and languid, ever-so-slightly camp style, he gets across that Algernon may be a rogue, but he is also very likeable. His is the best Algernon that I have seen in an amateur production, just as Mary Almeida’s is the best Lady Bracknell.

Gwendolen is charming and flirtatious but knows her own mind and is no bimbo; Susanna Greenwood conveys all these characteristics well. Cecily, on the other hand, is shallow and flighty, which must make it a rather thankless part to play, but Lauren Turner carries it off effectively. The pace can often drop slightly in Act 2, when Cecily and Gwendolen have their long scene of mutual dislike on finding that they are both in love with the fictitious Ernest Worthing. However, these two actors ensure that our attention is held, and their oh-so-polite cattiness is very well done.

Jenny Wise captures just the right mouse-like character of Miss Prism, but she has a sharp tongue and gives the impression that she is a shrewd observer of what really goes on among her supposed betters. Her patience with the feckless Cecily and her affection for Canon Chasuble are rather movingly conveyed. Phil Vivian gives a confident performance as the lovestruck, platitudinous Chasuble.

Jack Worthing, while deeper than his friend Algy, is a character to be conveyed through an air of relaxed superiority, throwaway gestures and a drawling voice. Although John Sivewright has as fine a track-record as any actor in local amateur theatre, the role doesn’t suit his fortes, while some of the costume choices suggest a confusion over which time period this production has been set.

The Importance of Being Earnest continues from Friday 17 – Saturday 18 September (7.30pm each evening with a 2.30pm Saturday matinee).