The greatest compliment that can be paid to this production is that it does justice to one of the most popular plays in the canon. It allows all the brilliance of Wilde’s 1895 work to scintillate for the entertainment of the audience as epigram follows epigram and the familiar story unfolds of two likeable upper-class rogues who evade their social obligations and two wilful young women who have a clear idea of what they want. 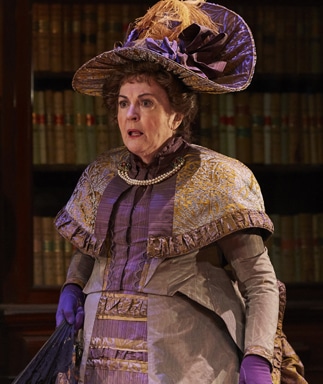 The sub-title, ‘A Trivial Comedy for Serious People’, is right: it is essentially a trivial piece and any attempt to find darker aspects, a link to Wilde’s homosexuality or serious social commentary is doomed to failure. If there is a theme, it is one of strong women, epitomised by Lady Bracknell. Is there any part so under the influence of one interpretation? Every actress playing the role has Dame Edith Evans sitting on her shoulder. And is there any part so often judged by one line: ‘A handbag’? Gwen Taylor – spoiler alert – chooses to appear hugely amused and to say the line on a laugh, which gives added power when she returns to her usual austere self, with lines like ‘The line is immaterial.’ But it doesn’t quite work and in general one might like Gwen Taylor to be more dominant and acerbic – although in making those judgements, I have to admit that I can’t quite banish the tones of Dame Edith from my head.

It is important that Gwendolen, Lady Bracknell’s daughter, should be sparky and not just drippy, and Hannah Louise Howell brings out the toughness of the character well. Likewise, Cecily is a resolute person, whether in her flightiness, her fantasising or her dealing with the final denouement; Louise Coulthard brings light and shade to the character in a notable performance. Even Miss Prism is a tough old bird in a governess-y sort of way, and Susan Penhaligon plays her with none of the fluttering vagueness that marks some interpretations.

As the two young men, Peter Sandys-Clarke finds a streak of seriousness in Jack Worthing and makes him generally more likeable than Algernon Moncrieff: Thomas Howes, who nevertheless plays the silly ass effectively. Both tend to resort to shouting at moments of high emotion, especially in act 2, which represents a definite dip in both action and wit between the verbal fireworks of act 1 and the eventful resolution of the plot in act 3.

There is an excellent interpretation of the innocent and confused Canon Chasuble by Geoff Aymer. Let us address an important current issue head-on. Having not looked at the programme before curtain up, I was thrown on his first entrance to discover he was black. Even to write that sentence is racial discrimination, which I genuinely believe to be morally wrong, never mind politically incorrect. But it is racial discrimination with a basis in logic and fact. It bothered me not at all that Edmund in Anthony Sher’s Lear was played by a black actor, while Maxine Peake was an outstanding Hamlet, but those two plays can be set in an indeterminate time and space. Here, the setting is precise: south-east England in the 1890s, where a coloured parish priest, let alone a canon, would have been unthinkable. It does make a difference to one’s initial reaction to an actor, and it is a tribute to Geoff Aymer that it matters less and less as the play goes on. Happily, our children are colour-blind and the lines between races and gender will become increasingly blurred, but in these days when such blurring is still a novelty, it can cause problems in certain plays to an older generation. While admitting that it is unfair to coloured actors in particular, this is a fact that directors would do well to remember.