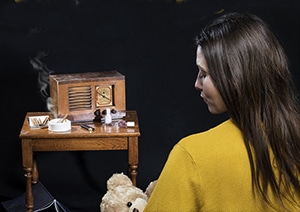 The Killing Of Sister George is essentially a parody of controversial exit plots in long-running serial drama The Archers: Sister George is a fictional radio character, a district nurse in the rural community of Applehurst (rather than Ambridge), who is being controversially written out of the BBC radio soap in order to boost ratings and ‘save the show’. The problem is that actress June Buckridge has become so engrained in playing this role that she is taking her alter ego’s death very personally indeed – and the actress’s behaviour leading up to the decision may give credibility to that reaction!

Although Sister George is a completely benevolent, sweet, almost pious and altruistic character, Buckridge (referred to as George) is the total opposite: she has extreme mood-swings (fuelled by her excessive use of gin) and is controlling and insulting of her flatmate, the innocent and susceptible Alice ‘Childie’ McNaught, who seeks solace in her numerous Victorian dolls.

Sarah Russell is excellent as the multi-faceted George, a real Jekyll and Hyde character: sycophantic to BBC executive Mrs Mercy, showing an almost frail side to her when her career (and purpose) is threatened, while being obnoxious and oppressive towards Childie. She flicks the switch between her character’s mood-swings as effortlessly and seamlessly as she does the different accents she has mastered. Although the George’s sexuality is never explicitly defined, it is clearly implied through Russell’s physicality, posture and mannerisms (arguably stereotypical, but in keeping with the satirical nature of the play).

Joanna Iacovou is utterly compelling as the vulnerable and downtrodden Childie; not only does she portray a complex character and range of accents with great skill and finesse, she inhabits the role, actively listening when the focus of attention is with the other actors on stage, accentuating her character’s presence with a subtly that never pulls focus away from whoever else is speaking at the time. The way that she defends her abuser one moment, cowering from her ill-treatment the next, is provocative and poignant. Again, the nature of Childie’s relationship with George is not clearly depicted, but this somehow adds to the authenticity of the scenario.

The props and costumes are perfect for the 1960s setting with great attention to detail (I’m sure the tea in act 1 is actually steaming hot!), while the radio excerpt and pre-show/interval soundtrack demonstrates how much good sound design (by Jamie McCarthy) and execution enhances a stage production.

I am still undecided if I actually like this play or not; it is challenging and at times unpalatable (whatever the relationship is between George and Childie, it is clearly an abusive one, both verbally and physically, which at times is very uncomfortable to watch), although the themes within as are relevant, even with a different perspective, now as when the play was written in the 1960s.

However, there is no doubting the quality of the performances of the four members of the all-female cast, or the skill of director Kristina Wilde in overseeing this production’s transition to the intimate venue of the Maskers Studio. With the performance space angled with seating arranged to create a thrust stage, it would be possible to see this play on more than one occasion and take something different away from each viewing. The actors move naturally, facing each other squarely as they would in reality, rather than always performing out to the audience – and this adds to the impact and power of the performances through their naturalistic body language, stance and gestures. The production is very well-paced and all the elements of pathos, poignancy and dark humour are palpable.

The production run until 10 March at 7.30 each evening.