We theatre snobs like to say that the stage has virtues to which the cinema can never aspire, but the truth is also that film can do lots of things that theatre cannot do. Quite apart from being able to portray wide open spaces, a talented film director has many more devices at his disposal to create an atmosphere or to trigger the audience’s reactions. Take, for example, the 1955 film of The Ladykillers, the well-known story of a gang of bank robbers who set out to dupe an old lady, Mrs Wilberforce, but get their come-uppance. Even though it is an Ealing comedy, it is not always a comfortable one, and the air of menace is very real. When Graham Linehan turned the screenplay into a stage play, there were nods in this direction, for example in the silhouettes looming up in the glass of the front door, but something was lost and some unsubtle farcical elements introduced. 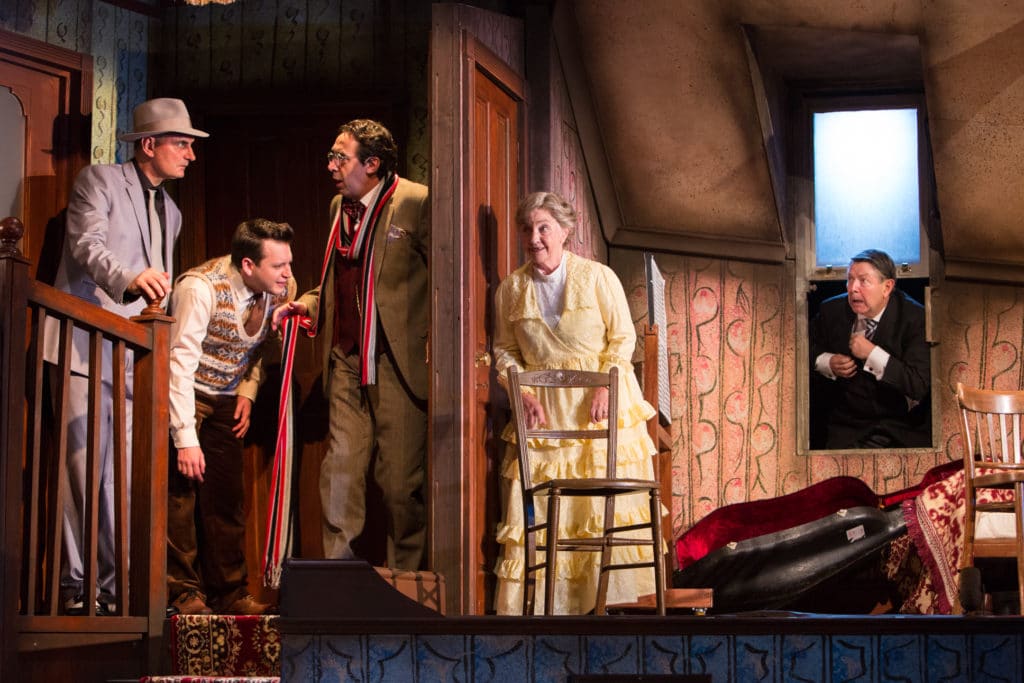 Those elements tend to be emphasised in this production – a sound effect like a constipated trombone every time a straightened picture falls crooked again rather sets the tone – not least in the character of Professor Marcus, the gang leader. Stephen Elliott intentionally overplays him, with wild energy and slightly manic gestures. It is justifiable and he does it very well, so it is perhaps unfair to contrast his interpretation with Alec Guinness’s threatening suavity in the film – but it’s jolly difficult not to. In the rest of the gang, Sam Lupton and Damian Williams are excellent as the pill-popping young thug and the thick but lovable ex-boxer respectively. So is Graham Seed as the Major, although (spoiler alert) he must beware of being typecast as characters who fall off roofs, since he was Nigel Pargeter in The Archers for 27 years. Anthony Dunn as Louis perhaps fails to convince us of the real innate viciousness of the character. Ann Penfold is the delightful old lady who, even when thoroughly confused by Marcus’s verbal machinations, remains a force to be reckoned with.

The set is visually impressive. It is designed by Richard Foxton (who rather pretentiously works professionally as just Foxton, no doubt in preparation for becoming the artist formerly known as Foxton). It represents both the outside of Mrs Wilberforce’s house and, thanks to a revolve and folding out wings, the inside. The way the actual robbery is represented in act 1 is most ingenious and effective. The problem is that the switches between the interior and the exterior take time, which tends to break any tension, especially in act 2. In the more humble surroundings of both the Tivoli in Wimborne and the Mowlem in Swanage, I have seen sets that have been far less ambitious but have served the play better. Another niggle on the technical side is the incomplete blackout: characters can clearly be seen moving to their new positions, including a couple rising from the dead to make their way offstage.

Despite the reservations, it remains a good play, well performed, and the first night audience warmly appreciated it. The production, which is staged by Salisbury Playhouse in association with theatres in Ipswich and Hornchurch, is well worth catching during the rest of its run in Salisbury, which ends on 18 November (evenings at 7.30, matinées on Thursdays and Saturdays at 2.15).