Silva Semerciyan’s play is loosely based on the true story of the Cottingley fairies, in which two young girls, Elsie Wright and her cousin, Frances Griffiths, borrowed a camera from Elsie’s father and took pictures that appeared to show fairies. The images came to the attention of Sir Arthur Conan Doyle, who used them to illustrate an article he was writing for Strand Magazine, and the photographs caused a sensation, dividing opinion as to their genuineness.

The pictures were taken in 1917, at a time when many families were suffering the loss of male family members in battle, and interest in the spirit world was high. The playwright has therefore placed her story in the context of World War 1, and added another dimension by introducing a female investigative journalist sent to prove that the pictures must be fakes and to question the nature of what constitutes art.

Through the use of back-screen ‘frames’ to show the fairy pictures, Cottingley, 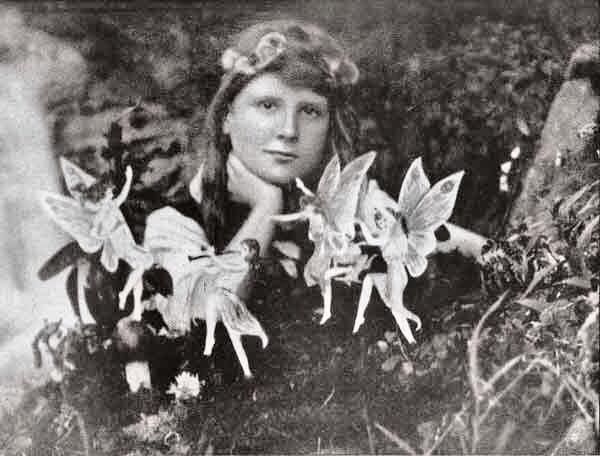 London and wartime scenes both at home and in battle, all fascinating in their own right, plus a simple but very effective set and a musical background of mostly wartime tunes, the audience is quickly drawn into this fascinating, multi-layered story.

A lot of those tunes are actually sung by the company and, not for the first time, I was bowled over by the standard of singing, much of which is a cappella but absolutely spot-on from the first note. In fact, I’m still silently singing the beautiful ‘Keep the home fires burning’ as I write this.

In most theatrical productions the characters are cast as near to their intended ages as possible, but in a student environment such as this it is inevitable that everyone in the year is more or less the same age (yes, I know that there will be exceptions, but I’m generalising!), which could make for a lack of realism. However, I was completely convinced by all, whether playing teenagers, parents or other adults, partly of course thanks to the outstanding costumes, make-up and hair styles so beautifully created by the students in those departments.

The 17-year-old Elsie Wright is beautifully characterised by Bramble Wallace and Emma Boyd’s bubbly Frances Griffiths proves a delightful contrast to her troubled, more introverted cousin. Among the rest of the 17-strong cast in this ensemble piece, there are outstanding performances from Emily Benstead, showing her versatility in several contrasting roles (I loved her newspaper editor); Jessica Rashleigh as Elsie’s mother; Tabitha Riley as journalist Winifred Douglas; Ethan Harvey as Sir Arthur Conan Doyle; Patrick Riley as Mr Wyedale/Mr Catling; and Disa Andersen as Agatha – the latter invariably the person who started off the singing with her beautiful voice.

There are further performances of this beautiful production on Friday and Saturday, at 3.00 and 7.30 on both days.