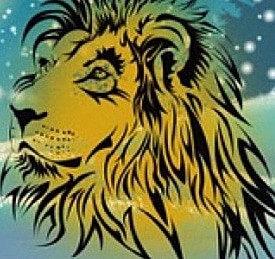 There is something distinctly appealing about the thought of escaping some of life’s less happy moments by stepping into a wardrobe and finding oneself in an alternative universe – although given our current cold, damp weather, I’d probably prefer somewhere rather less snowy than Narnia.

This adaptation of C S Lewis’s classic novel by Glyn Robbins is relatively short – and in this production may be even shorter by the end of the week as scene changes speed up – but contains all the elements necessary to grip the audience’s attention from beginning to end.

The hall is fairly small, which of course dictates the depth of the stage and means that there can only be a basic set. However, back flats, beautifully painted by scenic artist Bethany Redwood-Pain, plus the wonderful costumes and incredible make-up of the cast, more than do the job of creating Narnia, where four children are instrumental in helping the true ruler, Aslan, rid the troubled land of the evil White Witch.

Those four children are on stage for most of the evening, and Matthew Procter (Peter), Owen Hunt (Edmund), Erica Lakin (Susan) and Ellie Watt (Lucy) all do a superb job, making their characters absolutely believable. I must particularly congratulate Erica for still looking young enough to play a child, even though she has now reached the grand old age of 18 (her words, not mine!).

There are some cracking characterisations among the cast, not least Becky North’s excellent White Witch; she uses her height to full advantage and is as scary as intended. Her sidekick, Maugrim, is played by newcomer Piers Darling, who is making his first stage appearance after a 25-year break. I do hope he doesn’t leave it another 25 years, because he is clearly a great asset to the Players. The witch’s adversary, Aslan the lion, is also well played by Nathan East, who seems to adopt any character with ease.

Of the other characters, I was especially taken with the Beaver family, played by Teresa Miller, Adele Buxton and Rosie Cracknell, as their funny little walks and paw movements were a real delight. I also adored Charlie Lakin’s gorgeously characterised Mr Tumnus, the faun, as he has stage presence by the bucketful and as a result is extremely watchable.

The denouement, where the White Witch gets what she deserves, is particularly well staged with meaningful mood music adding to the drama, and credit for this, plus the detailed characterisations from all on stage, must go to the evening’s real star, director Lucie Evans, who has been building up to this moment since the age of 6 when she made her first-ever stage appearance as a hedgehog in this very same show. Well done, that hedgehog.