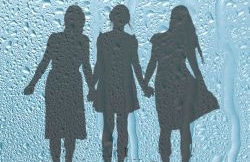 The Memory of Water is a comedy by English playwright Shelagh Stephenson, first staged at Hampstead Theatre in 1996. Three sisters have come together for the funeral of their mother, Vi. Vi was a glamorous woman when younger and freely admits she had little time for women, always preferring male company. ‘Yet you had three daughters’ would come the response and much of this play is an exploration of how and why we see things in a certain way, dressing the truth perhaps for our own memories, making them cleaner and easier to live with.

I am told that this production is all but sold out, but those of you with tickets are in for a treat and masterclass in acting and directing of this emotional yet very dark-humoured play. Becky Mills and her team (including assistant director Danni Fletcher and ambient lighting designer Nigel Roache) have created something rather special in this intimate space, adding to the claustrophobia of the characters’ lives as everything takes place in Vi’s bedroom. There is attention to detail in the supply of props (Maggie Blake) such as the angled dressing table mirror, the way the door is used to such great effect (actors just holding it slightly before pushing through), subtle costume jewellery, just hinting at the wayward life of before, and carefully selected projected images.

Meriel Shepherd as Vi is beautifully brutal in defence of her actions yet manages to evoke a warmth that you know her daughters missed out on. In her scenes with Clare Durham as Mary – an arch and yet moving performance – one can only guess what their real relationship was like; their mutual acting is sincere, endearing and highly watchable. Her reaction to the arrival of the coffin is so sensitively done, the horror yet love is so clearly etched.

Jane Russell as Theresa gave an admirable performance, showing anger and frustration at always being the one relied upon, her second act monologues with whisky bottle in hand being particularly memorable and emotional. Wayward hair emphasises the change in tack and revelation, restoration only coming back for the actual funeral day itself. Vikki-Jo Keens as Catherine, the youngest sister, the one ‘who knew her (Vi) less’ is equally commanding. Her monologue while on the mobile phone to her Spanish boyfriend is so well thought out: I actually believed I could hear the conversation in full, such was the power of her acting and look in the eye when the realisation of another ‘failure’ was imminent.

Rhys Lupton gives a solid performance as Mike, a TV doctor having an affair with Mary, his revelatory scenes being particularly sensitive to the moment, while Ryan Harris has great fun with suitable one-liners as Theresa’s husband, Frank, yet evokes a real sense of love, sympathy and respect for his wife even while she harangues and slights him as both drink and drugs unleash her inner demons.

It is the directorial naturalness of the piece that works so well: lines are said as normal conversation, each character overlapping as you would in emotional circumstances. And all characters are given natural things to do, be it making lists on a tablet, idly reading the ‘fan mail’ sympathy cards etc, which adds so much to the emotional punch.

This is excellent stuff all round. Get a ticket if you can to one of the remaining performances: 6-9 December at 7.30.