I would tell you how many years ago I first came upon Gilbert and Sullivan, joining this very society just a couple of years later, but in the interests of maintaining my credibility as a young person (ha!), I’ll just say that it was when the society was a mere twenty years old, and that ever since that time I have adored G&S with a passion that’s intense.

The Mikado is not quite at the top of my list – that honour goes to Patience – but it’s certainly pretty high, and this production has reminded me just what fun it is, and why it is still so very popular, even after 131 years.

Claire Camble-Hutchins’s take on the show is an absolute joy, with some delightfully innovative ideas that turn what could be negatives into triumphant positives. As an example, most of the ladies’ chorus have not been ‘eighteen and under’ for quite some time – but who’s to say that they have to be? Change the word ‘we’ to ‘they’, and have the ones who can get away with looking eighteen coming on stage separately for their first number, after which it matters not a jot.

Still on the subject of age, the company is so lucky to have several young principals who, because of their youth, make their roles seem so right. Adam Davis (Nanki-Poo), Mehreen Shah (Yum-Yum), Camilla Foster Mitchell (Pitti-Sing) and Amy McIntosh (Peep-Bo) are all utterly believable, singing and acting exceptionally well.

There is a wealth of talent within the slightly older ranks too, which is possibly why the decision was taken to split the role of Pish-Tush into two – Pish (Tony Broomfield) and Tush (Patrick D’Ardenne). I couldn’t see any other reason why this was done, and in all honesty I don’t think it worked, tending to look really rather odd.

Mike Griffiths first played the title role back in 1989 and has reprised it a number of times since, but I think this is the best yet and he seems to be thoroughly enjoying himself. He isn’t the only principal to be reprising a role, and Robin Lavies is also revisiting Pooh-Bah to great effect.

Ian Metcalfe is no stranger to playing Ko-Ko either, and he comes close to stealing the show with a superb performance in which, as tradition demands, his Little List includes recent headlines including, of course, Brexit and Donald Trump. He is well complemented by Amanda King’s outstanding Katisha, and the two of them really are a match made in heaven, not least during the moving and beautifully performed Tit Willow. 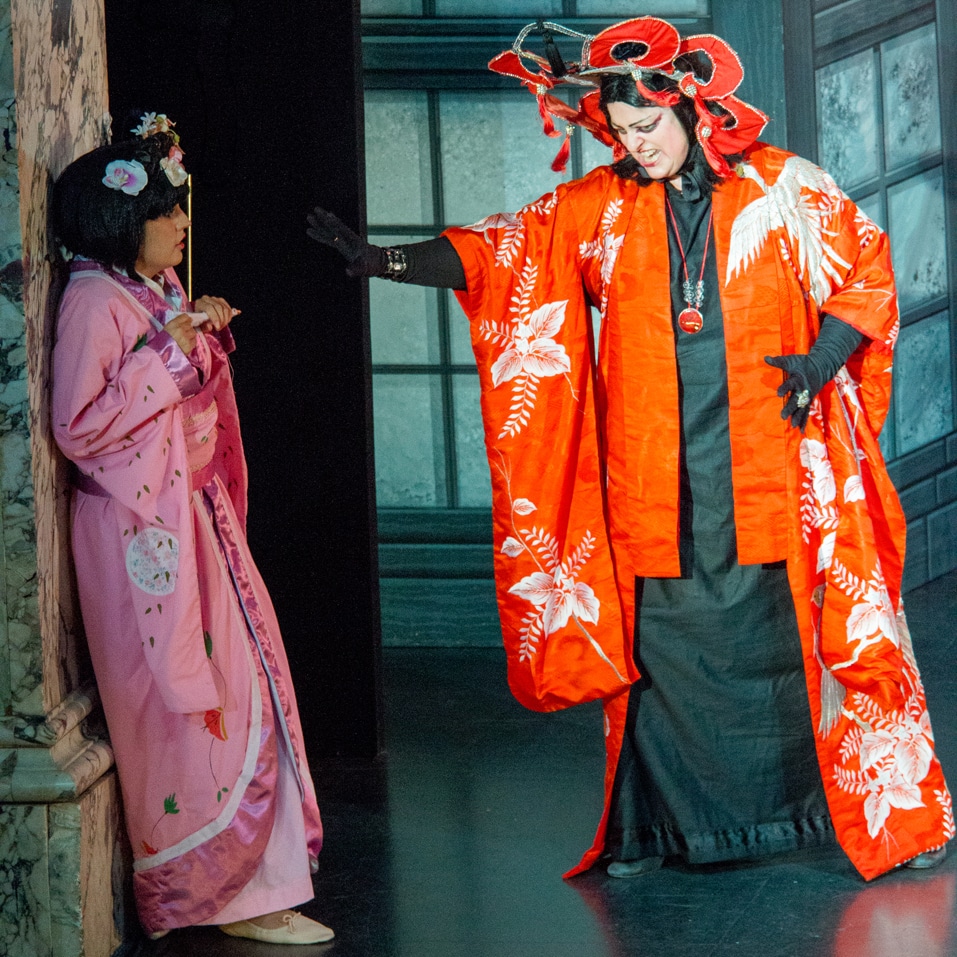 There is very strong chorus work, with simple but unusual and effective choreography, and whilst standing holding bamboo ‘frames’ to complement the main set might look easy, the men involved in this certainly had their work cut out during ‘Here’s a how-de-do’ as they ran about the stage.

Chorus singing is also of an extremely high standard, and I feel the need to award some metaphorical gold stars to the very few (25% of the total, I think, maybe less) altos, as I could hear their lines clearly – when you’re an alto yourself, you listen out for these things!

On the slightly down side, the lighting did once or twice leave people momentarily in the dark, but I’m guessing this was a first-night problem, as I hope was the rather strange sound from an otherwise excellent orchestra at the beginning of ‘Tit willow’. I was also a little bemused, and not a little sad, by the intentional omission of the song ‘See how the fates their gifts allot’. Those are very small negatives, though, and the rapturous applause from a near-capacity first-night audience showed that this beautifully costumed production has been received very well indeed, as it most certainly deserves.