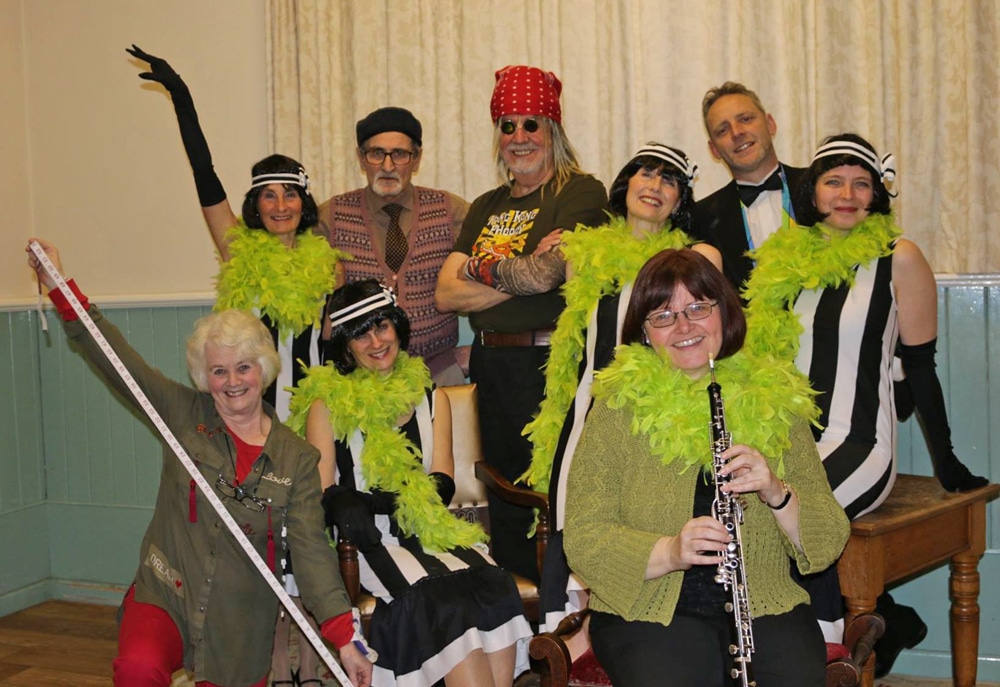 It’s a given thing that any production by this group will be something a little different and will be beautifully dressed, thanks to the ingenuity and flair of their director, Sonia Gilson. On this occasion this ‘show within a show’ mentions as many names as possible over the course of its two hours or so, and proved to be a very pleasant way of spending a Saturday afternoon.

The audience is introduced to a touring company, meeting not only the performers but also the stagehand, wardrobe mistress and doorman; in reality, in case I’ve confused you as much as I’ve just confused myself, they are all of course performers but some are acting out the roles of the backstage crew.

The four main sections – ‘What’s My Name’, ‘Our Forces’, ‘Where In The World’ and ‘In The Name Of Religion’ – gave the company the opportunity to sing all manner of songs from various genres, and with the super-talented Lee Redwood wearing his musical director’s hat, as well as playing keyboard, they sang them rather well, even though they were sometimes fighting against recalcitrant body mics that occasionally made alarming crackling noises or gave up the ghost completely.

Over the years Unison has grown in confidence, which is reflected in the performances. They don’t just stand up and sing but actually act out scenarios, for example during Helen Tate’s excellent oboe solo, ‘Italian dance’, with couples or individuals strolling on to sit at outdoor restaurant tables, (silently) chatting to each other or the waiter – this sort of thing really worked a treat.

Along the way the ‘backstage crew’ had their moments in the spotlight, and I’m still chuckling over Ian Clark and Linda Robbins’s ‘You’re somebody’, which had me laughing out loud, something I also did during the three monks’ chants. No, I’m not telling you why in case you go along to the show when it’s repeated in June.

The programme notes informed us that ‘… there might also be a little bit of work for you to do’, and in due course we were given sheets of paper on which were printed skeletons and asked to name as many bones as we could, with a prize for the winner. The trouble was that I don’t think most of us quite understood whether we were to name them as per the act one finale song, Dry Bones, or give them their correct titles, so this clever idea didn’t perhaps work as well as it might have done.

Highlights of this very enjoyable afternoon were the very entertaining ‘Lady Bumphrey’s ghost’ (Helen Tate), ‘Modern major general’ (Bob Amey), ‘Jerusalem’ (Pip Olden, accompanying herself on guitar), ‘Herod’s song’ (Ian Clark with Annie Humphris, Maddie Horne and Antonio Galli), and ‘Merano’ (cast). I also loved Sonia Gilson’s incognito appearance as a tramp, singing the lovely ‘God help the outcasts’, but my biggest plaudit of all must go to Maddie Horne for singing the incredibly difficult Sondheim tongue-twister, ‘The boy from’, and doing it so very well.

Performances in Ferndown have now finished but you can catch The Name Game at Broadstone Memorial Hall on 9 June at 7.30 and 10 June at 3.00. All performances are supporting the Motor Neuron Disease Association.