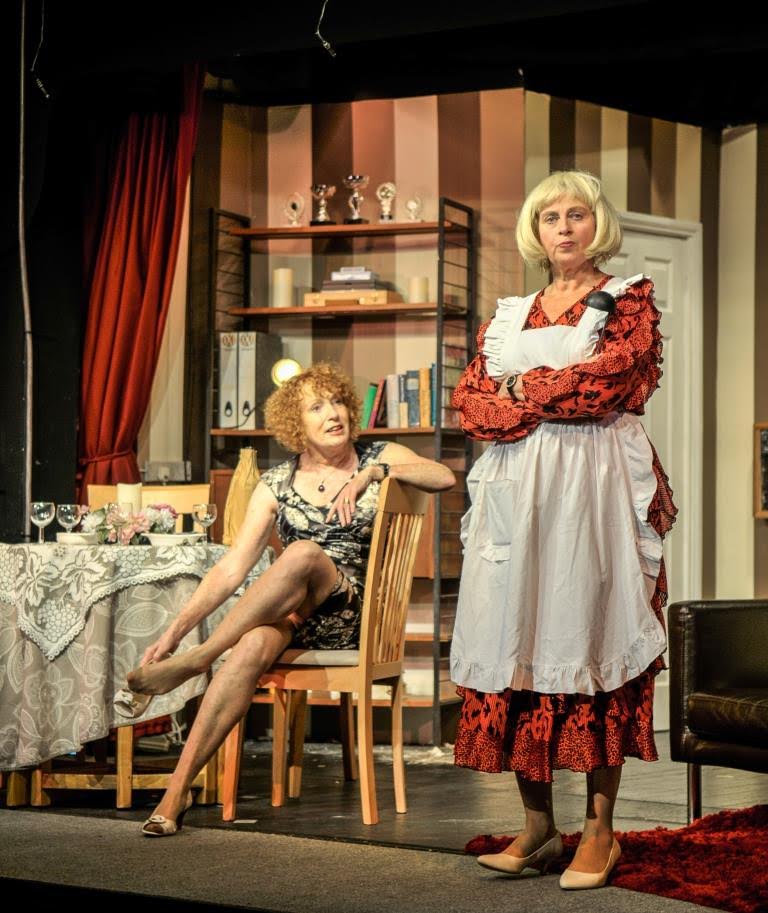 The Odd Couple is one of Neil Simon’s best-known plays. It opened on Broadway in 1965 but became familiar to a much wider public via the 1968 hit film starring Walter Matthau and Jack Lemmon. What is less well-known is that in 1985, Simon wrote a version in which the couple are female and the sexy Pigeon sisters from upstairs become a pair of Spanish brothers.

It is this version that the Burley Players are presenting at their village hall this week. Anyone who uses the term, ‘a village hall production’, disparagingly or to excuse low standards should go and see this one: every aspect of it is on the top line and it includes as fine a performance as I have seen on an amateur stage this year.

The play opens with old friends meeting for their weekly game of Trivial Pursuit and a bit of growing old disgracefully. We are straight into the natural but snappy dialogue so typical of Simon; it needs to be played with clarity and pace, and that’s exactly what we get from sexy Sylvie (Wanda Williams), stolid policewoman Mickey (Sharon Street), wise-cracking Renee (Sue Trotter) and innocent Vera (Veronica Johnstone). Along with Olive, the fifth of the quintet, at whose flat they are meeting, they are waiting for the last player, Florence, but she arrives distraught, having just left her husband of fourteen years.

Olive invites Florence to move in with her, and the comedy springs from the fact that while Florence is an obsessively tidy home-maker, Olive is in the running for the title of biggest slob in the world. As well as her neatness, Florence is a self-centred, attention-seeking hypochondriac who would irritate even a saint who ended up sharing a flat with her, yet she is quite endearing, and Pamela Berry does well to bring out these contradictory aspects of her character.

With the arrival of the Costazuela brothers from upstairs, comedy shades into farce. Paul Berry and John West have a ball, and the audience share their enjoyment.

As Olive, Janet West is superb. She has a natural stage presence and a physicality that expresses as much as her spoken lines. As a result, we believe utterly in this cynical, world-weary New Yorker whose forthrightness can be as annoying as Florence’s tidiness, who is more vulnerable than she cares to let on, and who in the end appreciates that we are all prisoners, willing or unwilling, of the bonds of friendship. The quality of this strong but subtle performance is sustained throughout, and it is a privilege to have seen it.

It must be a difficult play to direct. It is hard to get much movement into a game of Trivial Pursuit and a set that is well put together but has to be cluttered as part of the story poses its own problems. Annie McTaggart meets most of these challenges successfully and sensibly has the cast speak with not much more than a hint of American accents, which are more easily sustained than the full Bronx timbre. A special word for the sound by Mike Bailey and Mary Turner, which is effective without being obtrusive.

The Odd Couple is preceded by a fish and chips supper, with dessert in the interval, and the food is almost as good as what happens on stage, which is high praise indeed. It all makes for a memorably enjoyable evening.