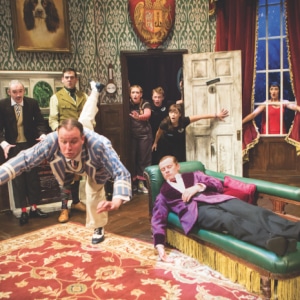 As audiences we all secretly love those moments in the theatre when things don’t go quite according to plan, and many of us have a store of memories of those moments – some of which are all we actually do remember of that production, the rest having disappeared into the mists of time. A couple of mine are a malfunctioning set in the original production of Martin Guerre and an equally malfunctioning pair of silk pyjamas in a 1970s production of Private Lives, and I can remember both instances as clearly as if they happened yesterday.

What an ingenious idea, then, on the part of writers Henry Lewis, Jonathan Sayer and Henry Shields to put all possible variations of malfunction together and clothe them in this brilliantly conceived play within a play. They are not the first of course – Michael Frayn’s 1982 Noises Off springs to mind, as do the Farndale Avenue plays so beloved of local theatre groups – but for my money they’re definitely the best, and by a long chalk.

In this instance we have the Cornley Polytechnic Drama Society performing an Agatha Christie-ish thriller, Murder at Haversham Manor, having finally scraped together enough members for a full complement of cast, their last few productions having been somewhat reduced versions such as Two Sisters and Cat. The trouble is that they are really not very good, but their ingenuity knows no bounds.

If you are looking for a synopsis then you are in for a long wait, as there is almost nothing of the plot I can give away without spoiling things for anyone who has a ticket for a future performance. Oh, hold on, I think it’s okay to say that there is definitely a murder. That’s in the play within the play, of course.

As far as the rest is concerned, the best I can say is ‘Don’t try this at home’. There would be potential for complete disaster, not to mention serious injury, if the actors were not 100% on the ball all the time, with split-second timing, and pretending to act badly only works if you are actually very good indeed.

I have nothing but praise for these fine performers, whose physical prowess is stretched to the limit in several nail-biting moments and who had Monday night’s capacity audience laughing out loud all the way through, cheering to the rafters during the curtain call, and leaping to their feet for a well-deserved standing ovation.