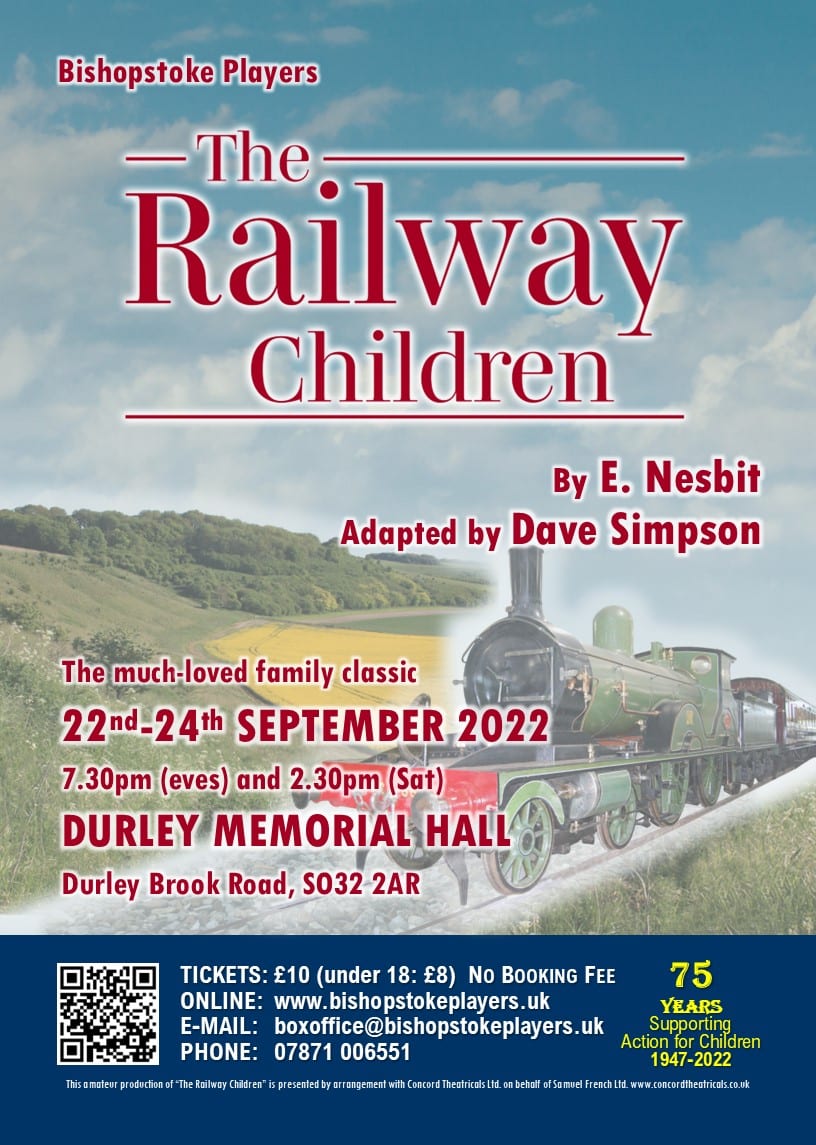 Bishopstoke Players asked who can resist that timeless line? Not me, apparently! Since early childhood, I’ve been drawn back to the Golden Age of Steam Railways and three children who are uprooted from their comfortable London home to resettle with restricted circumstances in a rural location which incorporates a small yet bustling railway station. Whether reading the book, watching the film with my own Dad, or listening to the LP recording over and over, I was captivated by the story of how Mother supported her children whilst resiliently coming to terms with the absence of her husband through a miscarriage of justice, how the children endeared themselves to the locals, saving the day in a way that proves heroes can appear in small yet spirited packages, and its iconic conclusion.

In recent years, there’s always a slight trepidation that the play I’m going to see may not live up to my childhood recollections or my memories might become tainted with a poor production. Bishopstoke Players quickly reassured me that they have been as faithful to the spirit of E Nesbit’s original novel as Dave Simpson’s adaptation and Lionel Jeffries’ 1970 film, staging a charming rendition of a much loved, evergreen tale. The only deliberate alteration is moving the location from Yorkshire to the Hampshire countryside (with a few nods to local destinations appreciated by the audience!), which works very well (although a bigger difference in accents would be beneficial).

This show coincides with Bishopstoke Players’ 75th anniversary. Throughout its history, they have raised as much money as possible for children’s charities, initially the National Children’s Home, nowadays Action For Children, and so it is entirely fitting that a cast of children is at the heart of this production.

The trio of Lola Barrett (Roberta/Bobbie), Lizzie Sellars (Peter) and Ella Cannavo (Phyllis/Phyl) establish their characters with aplomb and have lovely sincere sibling relationships – tender, caring, loving, funny, squabbling, shifting allegiance between themselves according to the circumstance, all as brothers and sister naturally do. The alternating rivalry and camaraderie with Perks’ children (Cameron Caws, Beth Bowers, Juliette Morrison and Amber Bailey) adds depth and humour to childhood friendships, and they all show much promise for future roles. It takes confidence and good direction to encourage the action to start when the lights are down and the focus elsewhere (such as with Perks’ narration) so that there is a natural flow to proceedings when the lights go up, and yet the trio (especially Lizzie) consistently achieve this.

Mother (a strong performance from Vicky Bonner) and the Old Gentleman (Pete Burton) add warmth, trustworthiness, affability and heart, while the introduction of Mr Szczepansky (played amiably by Adrian Barrett) reveals how prejudices and preconceived ideas can be overturned by communication and the hand of friendship.

I’ve seen two different versions in the past year, with the first production narrated by the children in asides to the audience. In this adaptation, the storyteller is Station Master Perks, and it is just as effective a way of linking the scenes together, enabling the narrative to flow with ease. Perks (the character made famous by the sadly missed late Bernard Cribbins) is brought to life by Kevin Bowers, transitioning seamlessly between enlightening the audience and his interaction with other characters. He enjoyed an easy-going rapport with the London trio as well as Perks’ own children, and he shared a very credible relationship with the delightful Kimberley Jones as his on-stage wife.

It is challenging to stage a play set in roaming countryside and along a busy railway in a small village hall, and yet Bishopstoke Players have overcome any limitations of such a venue with a simple yet effective scenery, excellent period props and costumes (with one or two notable exceptions) and good sound effects enhancing the overall ambience, while the lighting effects for the passing train was particularly good. There were a few stumbles and hesitations with opening night nerves, but overall, everyone was secure with their dialogue, diction was impeccable, and the story moved along very nicely at a good pace, with the children injecting an air of urgency at the appropriate moments.

The Railway Children runs until Saturday 24 September (7.30pm each evening with a 2.30pm Saturday matinee). Get your tickets while you can for a memorable and enchanting ride!