If I tell you that next week I will almost certainly make the same 60-mile round trip that I have made this evening, simply for the pleasure of seeing the company’s third and final production of the season, you may realise how much I enjoyed this musical version of Frances Hodgson Burnett’s well-known story about Mary Lennox, the orphaned child sent from India to live with her uncle in Yorkshire, and the difference she makes to the household there.

Having taken our seats well before the start, we had ample time to study the excellent multi-purpose set, not least its centrepiece of a dead tree with cups and a couple of chairs hanging from it, and various pieces of furniture such as a bookcase, desk and standard lamp strewn around beneath. It may sound strange but it worked perfectly in depicting the various scenes. The only thing I found slightly odd about the set was that although Mary’s bedroom actually had curtains at what one assumes was the window, whenever she was encouraged to look out at the view it was through the opened wardrobe – shades of Narnia, perhaps. 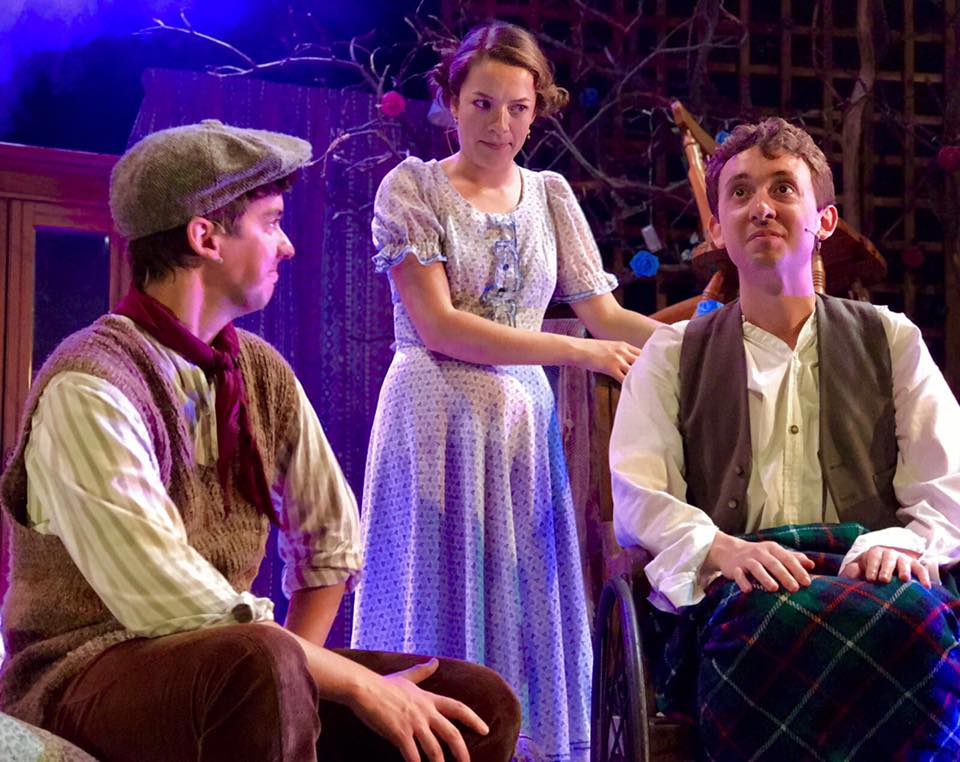 In the story both Mary and Colin, her cousin, are 10 and Dickon is 12, so for those roles to be played by adults requires a certain suspension of disbelief. Lottie Johnson’s spoilt, selfish Mary had us convinced immediately that she really was a lonely child, especially in her delight that the robin in the garden was singing just for her. Jack Mosedale as the manipulative Colin also has that same quality, while Peter Steele’s sunnily-dispositioned Dickon simply lights up the stage. All three have fine singing voices too.

I see from Clare Samuels’s biography that she is often to be found doing stand-up comedy, and she certainly brings a lovely comic touch to the role of housemaid Martha. Keith Hill’s dual roles of kindly gardener Ben and ‘baddie’ Dr Craven go down a treat, as do Fiona Gordon’s Mrs Medlock and Marcus Patrick’s Mr Craven, but I have to say that when one particular cast member was on stage, her presence was such that every eye was on her. Yes, Dickon’s dog, I’m talking about you. Roll over to have your tummy tickled and the world will love you for it.

With great lighting and absolutely superb sound effects adding those all-important touches, this excellent production – rehearsed in just five days – moved me almost to tears at times and had me laughing out loud at others. No wonder the almost-capacity audience applauded long and loud at the end.

The Secret Garden runs each evening at 7.30pm until 22 August and is followed by The Game’s Afoot from 24 to 29 August.