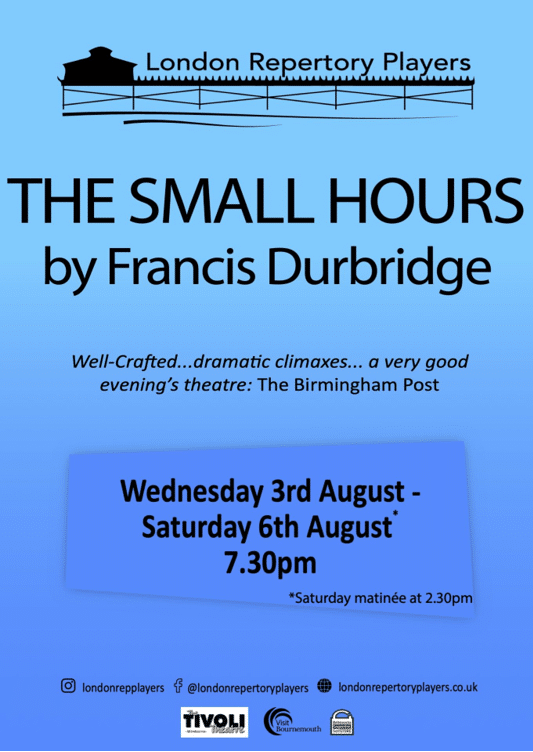 Leaving the frantic comedy of Alan Ayckbourn behind, London Repertory Players continue their five-week repertory season with a clear change of mood for their second production, presenting one of Francis Durbridge’s finely-crafted thrillers. And they do so very successfully, providing an evening’s entertainment that never suffers from lack of pace or interest and never fails to keep its audience absorbed.

Durbridge is probably still best or most widely known as the creator of the radio – and later television and novel – detective Paul Temple. In all, though, he also wrote nine thrillers specifically for the stage. The construction of The Small Hours reflects the writer’s skill at working with an episodic structure, consisting as it does of ten scenes over two acts. This could produce a halting overall effect but, such is the playwright’s plotting, that not only does each scene arrest and hold the audience’s attention but each also contributes vitally to the whole: initially, it does so by setting up a series of linked scenarios and relationships; subsequently, it brings together all of these elements in the crafting of a satisfyingly consistent resolution.

The play opens with the only scene not set in The Orchard Hotel near Chichester: the central character is on a flight back to England from Australia. As Carl Houston, Al Wadlan provides the beating heart of the production – and does so very effectively. (And I know that I have had equal reason to praise the actor in various past productions by the company.) Whether or not he knows more than he is letting on, is lying or telling the truth remains open to question until the final scenes and Wadlan presents the character with absolute believability while leaving just enough uncertainty to help keep the audience from becoming too certain of him – either way. His interactions with all seven of the other characters are distinctive while supporting a sustained and credible character, essential for the success of any production of the play.

As Ronnie Sheldon, the occupant of the adjoining seat on what turns out to be an eventful flight, Joseph Prestwich ensures that his character’s presence is felt throughout, regardless of the relatively small number of scenes in which he is physically present on stage. One look and one question from Prestwich in that opening scene resonate and remain in the audience’s minds throughout while Prestwich effortlessly holds our attention with each appearance. Equally, Victoria Porter, as Houston’s wife Vanessa, contributes to the creation of a relationship with her husband that remains wholly convincing amid shifts in how she views him, for which credit goes to both her and Al Wadlan.

In smaller roles, Kirsty Cox and Hepzibah Roe make the most of their opportunities in quite different ways. As hotelier Houston’s secretary, Cox provides a business-like and clearly efficient contrast with those characters connected with what has happened and what is threatening to happen to Houston. It could be an unrewarding role since it is the least affected by the turmoil in the central character’s life, but Cox gives Vanessa a suitably understated life and personality of her own without ever becoming mere functional. As Millie Decker, wife of Houston’s master chef, Roe is contrastingly on edge, nervy while trying desperately to stay on an even keel despite all that she has to endure. The temptation to overplay is resisted and her presence on stage adds real energy to her scenes.

In a role contrasting with but as enjoyable as that in last week’s Taking Steps, Neil James as George Westwood, the detective charged with making sense of two major crimes that might or might not be connected, is by turns assertive and somewhat humble but always authoritative. Durbridge brings him onto the stage more sparingly than is often the case with his equivalent in similar plays, but he exercises skilful judgement in doing so – and James’s performance is notably founded on a comparable sense of judgement as to how, convincingly, to extract the most from each of his visits to the Houstons as he gradually works towards an understanding of what has been going on.

As Millie’s husband, Bernard, Mitch Capaldi is given little to work with in his opening appearance, but the role increasingly offers greater challenges and Capaldi clearly relishes each, his performance swiftly growing in stature and becoming more and more engaging throughout. The actor handles some interesting changes in confidence very well, doing so with a nicely controlled performance. Completing the cast – and to describe any of the performances as merely doing that would be hugely unfair – is Richard Mullins, who, incidentally, directs the Company’s next production. As Oliver Radford, successful businessman, Mullins give a delightfully measured performance, his assurance contrasting, for example, with Houston’s irritability and unease and Capaldi’s over-reaching and ill-founded certainty.

To say more than that would risk a ‘spoiler’ of the kind that I’ve determinedly avoided so far. There is not a poor performance among all eight actors and this contributes greatly to what, while revolving around Wadlan’s performance, ultimately works so well because of the ensemble playing. With an unfussy set suitably evocative of what director Vernon Thompson reminds us, in his programme notes, is a period “before mobiles and internet” and under the well-paced and differentiated direction of Thompson, this is certainly a production to enjoy. It runs until Saturday 6 August and, as confirmed by the warmth of the first-night audience’s response, will prove a very satisfying and rewarding two and a half hours to those yet to see it.