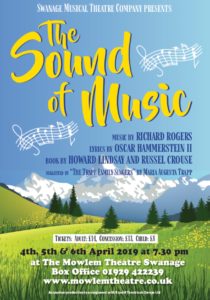 The entire show was a huge success from beginning to end and can only enhance the reputation of this well-loved Musical Society.

Emma Fidler, playing the role of Maria, gave us a truly memorable performance, moving from the frustrations to the delights of her character. She sang like an angel and you were entranced by her wonderful singing voice. She was able to capture all the emotions of her role from sadness to happiness. Supporting her was Adrian Lane as Captain von Trapp, who gave us a rounded characterisation from the martinet to a soft and gentle loving husband and father.

The von Trapp children, ably led by Rose Painter in the role of Liesl, were delightful throughout and captured the admiration of the appreciative audience. The rendition of all their numbers was enthusiastic and enchanting with an exceptionally high level of both performance and stage discipline. In fact, the performances of the children provide a solid component of the production’s success, with all seven putting in strong performances.

Pearl Nash as Mother Abbess opened the show with the Nuns. She played her part with sympathy and understanding and her singing of ‘Climb Ev’ry Mountain’ reduced the audience to tears. The three Nuns, Sister Sophia (Louise Wall), Sister Berthe (Julia Gardenne) and Sister Margaretta (Sara Morgan) were all excellent in their roles, bringing humour, annoyance, fun and laughter to their performances.

Michael Peden (Franz) and Ann Peden (The Housekeeper) both played their roles well and were believable characters. I loved the performance of Michael Boucher as Rolf Gruber; he portrayed the role as a ‘lovesick’ teenager, then transforming into a Nazi youth, really well. The duet he sang with Liesl was lovely; you really believed they were in love.

I warmed to Max Detweiler, played by Eddie Noades, as the show went on and his performance became more humorous. Finally, but not by any means least, was the performance of Linda Hernandez as Baroness Elberfield; she gave a superb performance in her role and was indeed the ‘lady millionairess’.

The Orchestra led by MD Nick Stewart did a wonderful job; at no time did I feel they were too loud or overpowered the people on stage.

The Production Team did a good job in as much as there was minimum noise of set changes and the lighting and sound was mainly perfect. They have every reason to be proud of the success of this show.