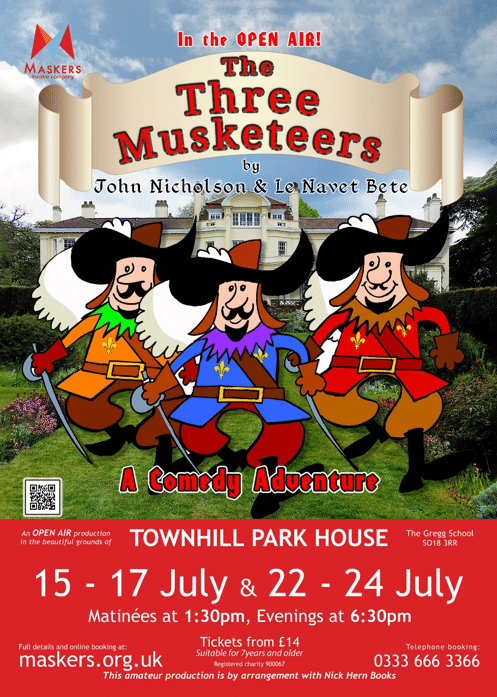 The Three Musketeers is an outdoor performance – what a treat! The Maskers have chosen the lovely and historic Townhill Park House for their open-air production of The Three Musketeers, a retelling of this classic tale. The audience are invited to bring their own chairs and picnics to this relaxed outdoor adventure which added to the ‘special’ feel that the venue provides.

Being open-air does not come without its issues though; sound, lighting and set all need to be considered and adapted for this and the Maskers did this exceptionally!

Particular attention must be brought to the fact that there is no ‘backstage’. The stage (a hill) is under a large tree and there is no option but to have all cast members in view at all times. It was delightful to watch cast watching and reacting to what their peers were performing.

Sound was brilliant, speakers around the audience meant every word was heard. The Maskers also needed to contend with the occasional plane flying overhead. They did this in a very humorous way, the characters acknowledging and making various comedic comments about the fact a plane was flying overhead and interrupting them rather than shouting over the noise – genius! Season was also chosen correctly for this as the summer sun meant lighting was no issue.

The Maskers opened with the acapella song ‘Wellerman’ and we are taken on a fantastically funny journey! Changes of scene are not as easy as in a traditional theatre, therefore the cast relied upon simple props (look out for the glittery butterflies!), furniture and the cast to tell the audience where they were. The cast announcing the location of each scene worked well as without this, audience concentration would have been temporarily lost whilst they deciphered where the scene was set. One moment of note was when cast were depicting paintings which was very funny, without ruining the joke for the future audience, take a look at the ‘ladies’.

The cast play multiple roles in this production (we are told around 30 each), with costume (and accent!) changes to differentiate between them. A particular favourite accent was King Louis (Duncan Randall), fab French and a fantastic wig too!

David Jobson plays the young a cheeky D’Artagnan with great character. A joy to watch, he was the perfect casting with just one role throughout and was in most of the show. Great performances from Rachel di Nucci and Abi Linnartz also – we were treated to clear diction and strong stage presence from both. The rest of the cast work well together playing a number of different roles and compliment the overall storytelling.

A fab moment was the audience participation of ‘duck quaking’, blowing a ‘duck whistle’ and throwing little yellow ducks at the cast. A side step from the story but a delightful one to say the least. Also to note that the whole of the outside space was used with characters throwing lines over the audience to each other and using their stunning prop horses to gallop around the audience, resulting in the feeling of very much being part of the action.

All for one and one for all!