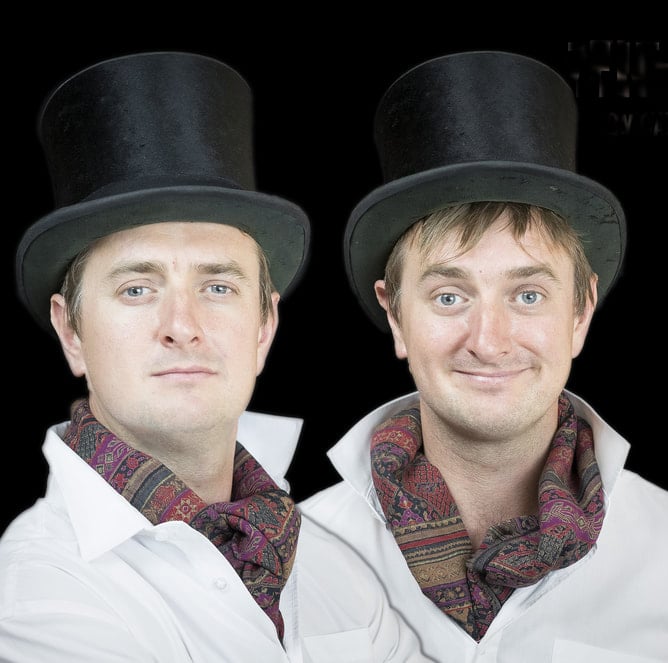 Estranged identical twins, Zanetto and Tonino, are unlike each other in every way other than looks. When they both arrive in Verona on the same day, each seeking a bride-to-be, romantic entanglements soon become hopelessly confused. As their paths cross they are never seen together, nor are their loved ones, friends and acquaintances even aware of the other. What could possibly go wrong – other than insults, threats, proposals, mistaken identities, offers of duels and boxes of jewels going astray?!

Marcus Whitfield (on stage virtually all the time) is superb in the dual roles of Tonino and Zanetto, each very different twin instantly recognisable to the audience and perfectly captured with distinguishing physicality and regional accents, while creating hilarious confusion and mayhem for the other protagonists. His impeccable comic timing and asides to the audience are brilliant and he commands the performance space.

It would be easy to conclude from this that Whitfield is a stand-alone success among the cast, but that would be demeaning to the remaining actors. Although the twins are the focus of the play and Whitfield gives a masterful performance, this is definitely an ensemble production, each member of the cast being integral to the quality of the production as a whole and through their individual performances. Youthful actors, four of whom are making their Chesil debuts, blend seamlessly with more mature, experienced actors and it is a delightfully comic production; it is refreshing and lively but pays respectful homage to playwright Goldoni’s commedia dell’arte roots.

Commedia dell’arte is an improvised kind of popular comedy in Italian theatres from the 16th-18th centuries, based on stock characters where the actors adapted their comic dialogue and action according to a few basic plots (commonly love intrigues) and topical issues. The characters often originally used distinctively designed masks and physical stances to represent the personalities, but Chesil Theatre have chosen here to cleverly and subtly demonstrate this through specifically designed make-up (Liz Petley-Jones), varying with the intensity of garishness and white face-paint according to the nature of their characters and enhanced by the thoughtful addition of their costumes.

Malcolm Brown (Pancrazio) has a wonderfully rich vocal quality, painting exquisite descriptive pictures with his voice while his facial expressions, accentuated by his lurid mak-eup, and gestures complete the representation of a somewhat complex character.

Will Pomfrey (Lelio) and Sam Burridge (Arlecchino) embrace the pantomime side of commedia dell’arte with physical and exuberant performances that highlight the virtues of this style of comedy, while Vicky Heaslip (Columbina) also demonstrates terrific comic flair as the sassy and feisty maid. There is admirable support from the remaining members of the cast, each with their own moment to shine.

The sword fights (without giving away any spoilers!) are splendidly directed by David Baldwin, the original a cappella songs (performed by Heather Bradford, written by Heather Bryant) are a delightful narrative addition, once again a nod to the traditional commedia dell’arte orgins, and the set is well designed to create the scene and bring the audience into the action.

Director Mark Frank has brought a cracking, entertaining production to the intimate Chesil Theatre venue; with the exaggerated, stylised opening (the mimed gestures emphasising the significance of the white-painted faces), audience interaction, excellent use of physical levels and multiple entrances, first-rate pace, well-timed audience asides and an aesthetic style that complements the venue and play, he has ensured an excellent evening of comic entertainment. If you don’t have tickets for this (it runs until 24 March at 7.45 each evening with a 2.30 matinée on the 24th), you will be missing out on a real treat.