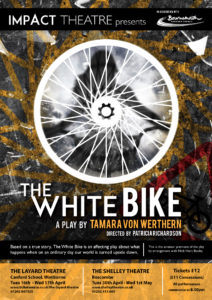 Some people may not be familiar with the concept of the ‘white bike’ or ‘ghost bike’ but I am. My family claim ignorance of the times that I have called out “Ghost bike” as we have driven past one chained to a railing, usually, but not exclusively, in an urban environment – but that just shows how much they (don’t) listen to what I say. Ghost bikes are (generally) memorials to cyclists who have been killed in road accidents and are usually erected near to where the accident occurred – I hope that this isn’t a shock spoiler to anyone who is planning to watch this show.

The playwright, Tamara von Werthern, wrote this hard-hitting one-act play for a London audience, based on a London incident, but it has been regionalised for a Bournemouth audience, with the connivance of the Road Safety Department of the (now) BCP Council (Bournemouth, Christchurch and Poole). They commissioned some  excellent helmet-cam footage, by Andy Storey of Prendas Ciclismo in Poole, featuring the traffic and street scenes of Bournemouth and Boscombe from the cyclist’s perspective.

The projection design was by Kevin Wilkins – and I haven’t seen such wonderful stuff since I reviewed The Gondoliers at The Lighthouse in 2017 … and (looking back through my notes) that was also by Kevin Wilkins. Projected images onto five mini-screens (circular), showing whirling spokes, traffic lights, headcam footage, hospital scenes, drifting clouds, bits of road surface and hospital monitors, were ahead of most things I have seen in amateur theatre – well done!

Coming back to the performance, the undoubted star of this (mostly one-woman) show was Tiffany Hannam-Daniels, cast as Isabelle. I can only think that her calves and thighs must be aching after that brilliant portrayal of someone riding a bicycle through Bournemouth and Boscombe. Her resumé doesn’t suggest that she studied mime, but the way her hands gripped the (non-existent) handlebars was a masterclass.

The supporting cast of Hayden Ashurst as Henry (the husband) and Alicia Shore, Bethany Harris, Chris Stowe as … all sorts of people, were also very good indeed.

This is a very powerful and moving piece – with a significant message. It contains some powerful language and distressing scenes – be warned!

The audience for this opening night performance at The Layard Theatre at Canford School was really quite small and this excellent production deserves more. It is on again at The Layard tomorrow (Wednesday 17 April) and twice at The Shelley Theatre, Boscombe – on Tuesday 30 April and Wednesday 1 May. This thing is astonishingly well acted and produced, shocking but well worth watching – see it if you can!