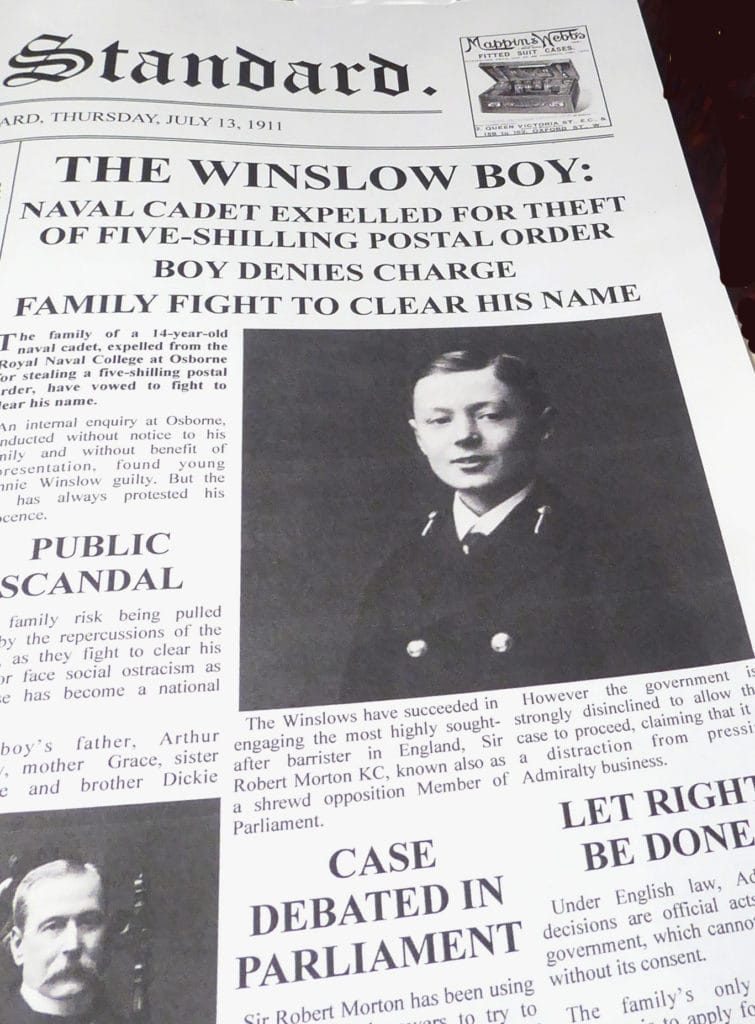 The Winslow Boy is based on a real case of 1908 in which a thirteen-year-old cadet at the Osborne Naval Academy on the Isle of Wight was accused of stealing a five-shilling postal order and expelled. He and his family protested his innocence and began a protracted series of legal proceedings against the Admiralty and the Crown. Terence Rattigan’s 1946 play covers the same story but changes the names, moves the story a few years closer to the start of the Great War and introduces a feminist interest by making the boy’s sister a suffragette.

The Edwardian era drawing room set, expertly designed and constructed by members of the cast, immediately puts us into the early part of the 20th century. The costumes too – particularly the ladies’ dresses – really set the tone of that period (although every pair of trousers worn by Calum Hearne, as the older brother, Dickie Winslow, seems to be too short).

Oliver Brunt, a pupil from Dumpton School in Colehill, opens the action with great confidence as the title character, Ronnie Winslow. His performance throughout the play, though not major, is excellent – I read that this is his stage debut outside the school environment, but I very much hope that we will see more of him in future.

Chris Durham plays the father, Arthur Winslow, who falls immediately behind his son’s protested innocence and proceeds against the Admiralty and the Crown at the expense of his own health and the family finances. He masters the role and the complex and witty dialogue and makes light work of a number of emotional scenes with members of his family. His portrayal of Arthur’s degeneration from a recent pensioner with mild arthritis into a breathless, frail, old man, who can scarcely stand unaided, is a tour-de-force; it is almost a surprise to see him bound onto the stage unaided for the final bows. There is no doubt that it is his role and his performance that drives this production.

The other driver of the high-profile legal action in defence of Ronnie is the suffragette sister, Catherine, played convincingly by Tracey Nicholls. She performs excellently in some emotional two-handers with her father, her fiancé, John Watherstone (Gary Paine), solicitor Desmond Curry (Colin Pile) and, finally, the family’s advocate, Sir Robert Morton (a strong and convincing performance by Sam Moulton).

Supporting roles are played by Judy Garrett, as Grace Winslow, the wife and mother and Chrissie Neal as the loyal maid, Violet. There is an amusing cameo appearance by Ann McColgan-Clark as the reporter from the Daily News, who is rather more interested in Mrs Winslow’s curtains than in the facts of the case and a brief appearance by Rob Cording-Cook as her photographer (nice period camera, but no flash – and in those days he would have needed it). I don’t know whether Ms McColgan-Clark really speaks like that, but the voice really suits the part.

The rain sound-effect is unconvincing, rather more like water running down a drain – perhaps it’s a shower. The amplified, off-stage dialogue between scenes, to set the scene and indicate the passage of time, are a bit of a surprise at first, as we aren’t sure where the voices come from or who they are supposed to be. But it sort of works and we get used to it after a while.

The bits of drama which involve the telephone are noteworthy. The tense silence, during which Sir Robert munches a sandwich while supposedly listening to a report on the trial from his aide, is spellbinding and has both the cast (apparently) and the audience on the edge of their seats. The one-sided conversation between Dickie Winslow and some (presumably entirely non-existent) member of the press is similarly well executed, with appropriate timings for the supposed responses from the imagined other party.

This is a serious play because of the serious consequences for the family concerned. Yet although one might almost describe it as a tragedy, it nevertheless contains a lot of humour. This WDP rendition is a very proficient and entertaining production and I heartily recommend it. The show continues on 16 and 17 February at 7.30 each evening, with a matinée on Saturday at 2.30.