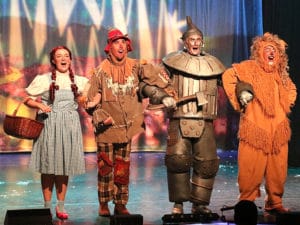 y’s ruby slippers are tip-tapping across the Tivoli stage this week as Wimborne Musical Theatre head in a very different direction from the comparative sophistication of their last two shows, Sister Act and 9 to 5. In many ways The Wizard of Oz is the American parallel to Alice in Wonderland, with its innocent but resourceful young heroine and its surreal, dream-like quality. Like Alice here, it is deeply ingrained in American culture, aided by the classic 1939 film starring Judy Garland. There is a touch of pantomime in there, too, and I always want to boo and hiss the Wicked Witch of the West as vigorously as I would Abanazar or the Ugly Sisters.

Those iconic ruby slippers are on the feet of Hermione Mason, who as Dorothy holds the whole thing together. She makes a convincing teenager, her American accent is sustained well without compromising audibility, and her attachment to the Scarecrow, Tin Man and Lion is touching. Her singing may not be as strong as her acting, but this is an endearing and well-conceived performance.

Her three chums – the Scarecrow (Duncan Sayers), the Tin Man (John Bounds) and the Lion (Lee Neal) – are a strong team. They act exceptionally well off each other and Dorothy, and they are all blessed with fine singing voices. The Wicked Witch is a splendid part, broomstick, green make-up and all, and Jemma Cable goes to town with it, striding and cackling to great effect. There is a very natural performance from Phil Evans as the Wizard. Ron Kite and Selina Rumbold play the ‘American Gothic’ couple of Uncle Henry and Aunt Em before transforming into the Wizard’s guard and the good witch, Glinda, respectively.

Director Duncan Trew makes good use of a constantly changing set and what seems like an infinite number of backcloths. Suzi DeVilliers provides some fairly straightforward but effective choreography – the Jitterbug scene is a highlight – and musical director Jonathan Spratt keeps up the high standard of singing for which this Society is known. The costumes, like the sets, are bought in – who would fancy making a Tin Man costume in their spare time? – but the lighting effects, so important in this show, appear to be home-grown and head of lighting Luke Baines deserves a shout-out for them.

The show itself has a couple of challenges for amateur companies to overcome with inevitable limited resources, and I don’t know the answer to either of them. Toto the dog is played here by Bramble, who although immaculately trained, at times wandered around the stage or pawed at Dorothy’s dress while she is singing. This can be distracting and audience laughter at the dog’s antics sometimes masked important dialogue. Then there is the tornado which blows Dorothy from Kansas to Oz; here it is conveyed with some surging music and vigorous lighting effects, but the crew were visible while busily changing the set.

Those criticisms of the material take nothing away from this production, which is full of both talent and charm. It is on every night at 7.30pm until 29 June, with a 2.30pm matinée on the Saturday.