When BMT told me almost a year ago that they were planning to perform this show, my heart sank as it has been done locally so many times and just did not seem exciting enough for this innovative, first-rate company. I could not have been more wrong, and it could not have been better.

If you analyse what makes a particular production great, it is not just the performances, wonderful though they may be, but everything else too – set, lighting, sound, costumes, make-up, musicians and a million other things that come together to make the whole.

By and large, gone are the days of creased back-cloths and clunky sets that take ages to change. Nowadays projections are used more often than not, and locally there is no-one more talented in this area than Kevin Wilkins, whose outstanding design for this production is simply stunning and is well complemented by Laura Ward’s excellent lighting design, which frequently sees colours whizzing around the whole auditorium. Costumes are brilliant, too, as is the specialist make-up, while the orchestra may be hidden from sight but is absolutely superb.

Another thing that lifts this production into the stratosphere, so to speak, is that there is real flying – well, with wires attached (they’re not quite that clever!) – for both Witches, and it is incredibly impressive. Just the thought of being so high above the stage makes me feel nervous, so many congratulations to both ladies for making it look as if it is something they do every day. The Wizard also flies off in his balloon, which worried me just a tad as the basket appeared to have no bottom. 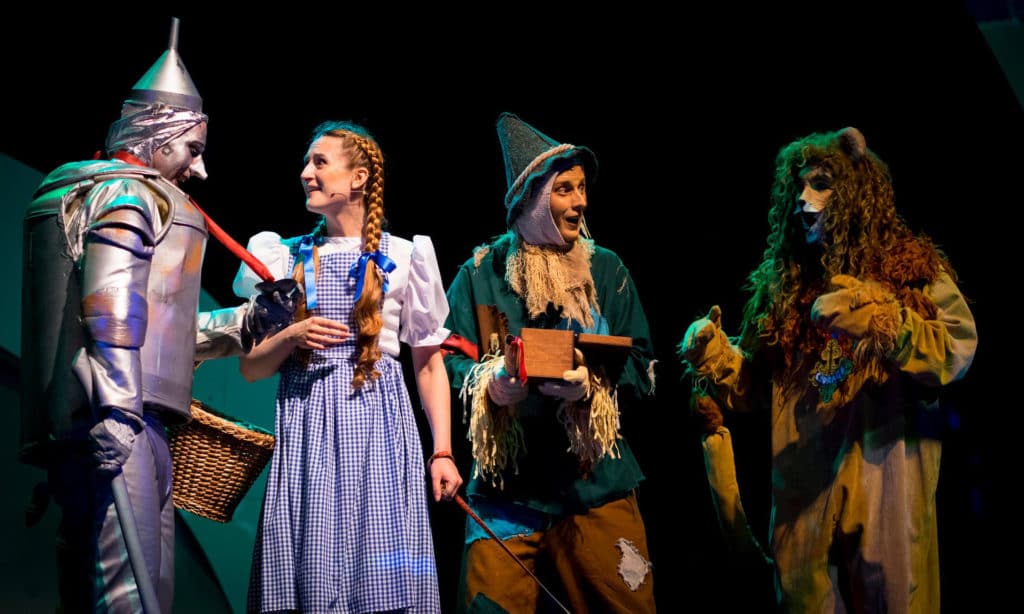 BMT is now well-established as a force to be reckoned with on the local scene, so it is no surprise that although some of the cast are regulars, there are several new faces among their ranks. One of these is Abigail Austin, who is a real delight as Dorothy, giving a lovely genuine characterisation. Her equally delightful companions on the Yellow Brick Road are Ollie Slee (Lion), Neil Tallant (Scarecrow) and Rob Arrowsmith (Tinman), and I certainly can’t ignore Merlin (Toto), BMT’s first canine member, who completely stole one scene by devouring a dog biscuit (cunningly disguised as Professor Marvel’s sausage) with such relish that all eyes were on him as he crunched away.

There are outstanding performances, too, from the ever-smiling Kelly-Anne Singleton as Glinda, the Good Witch (also Aunt Em), and Lisa Stead as the Wicked Witch (also Miss Gultch), and a lovely cameo from Glenn Miller as the Emerald City Guard (also Uncle Henry). Martin Mansfield makes a great job of playing Professor Marvel/The Wizard, despite having only taken on the roles at two weeks’ notice. There is also excellent chorus work, from both IDance School of Performing Arts’ little Munchkins and the very animated adults.

Finally, I must mention the superb choreography – the Jitterbug is simply tremendous.

The production team of David Sandham (director), James Stead (musical director), James Dixon-Box (choreographer) and Doug Gubbins (producer) have done the most fantastic job and given the Regent Centre a production that should have the crowds following the Yellow Brick Road straight to the box office.