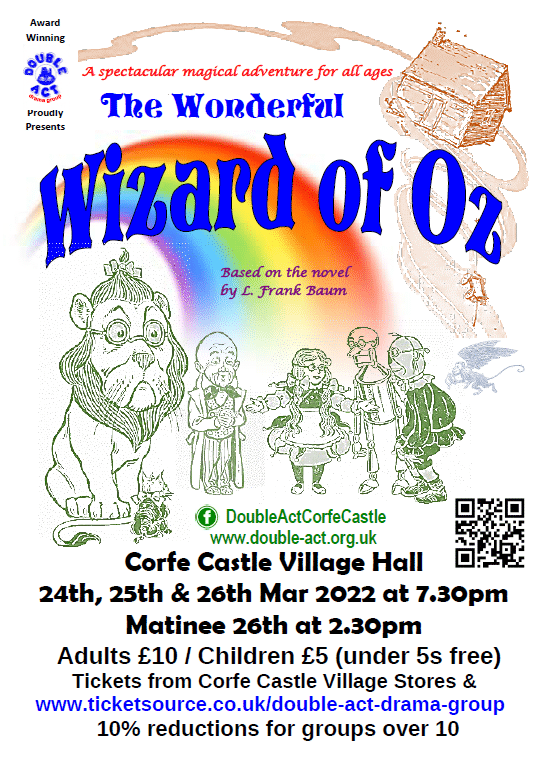 Whilst every performer will generally have dreams of performing on large stages to an audience of 100s, maybe 1000s for the super ambitious, there’s something inherently charming about community hall theatre. Perhaps it is the comradery of local people coming to see their friends and family in a variety of theatrical pursuits, or perhaps it’s the satisfying feeling that attendance is greatly appreciated by the theatre company. Either way, at a time where the future of local and national theatre is so uncertain, I cannot express how important it is for local theatre enthusiasts to support their local groups.

It seems somewhat redundant to mention Covid safety now, especially given the recent changes to the law, but as this is something people still, thankfully, care about I think it is important to say that the Double Act Drama Groups Covid safety regulations were very good. It felt very safe with a one-way system, and plenty of room for people to have space if they wanted it.

The staging of the production was highly unusual but really quite enjoyable, with the performers set in the middle of the room with audience members on either side. The audience felt involved in the whole production and there wasn’t a single moment where the action could not be seen or heard. It was mentioned that this was a new set up that they had not tried before, and it really worked very well.

For community theatre the special effects and technical aspects of the show were surprisingly advanced. Cleverly set up projections were used so that both side of the audience had a good view, and whoever created the projections along with the video edits is a very clever individual indeed. The projections, in the main, flowed well with the show. There were some slightly bizarre additions, such as a rocket shooting across the room and a leaf blower being shot at the audience to make things that little bit windier, but it was all in good fun. Sound, as a rule, was quite good, but there was a significant issue with the witch’s mic and, given the audience could quite easily hear the performers without the mics, it felt somewhat unnecessary.

The costumes were a mix of classics vs a unique approach. Dorothy was in her classic gingham ensemble, but the Wicked Witch of the West was dressed more like Pennywise the clown. The creative flair was appreciated but, given the rest of the character costumes are what you would expect from the Wizard of Oz, the witch stood out and it was a little confusing. There were some other excellent costuming efforts, including moving trees and a brilliant giant, animatronic style spider who features in Act 2.

As with all local theatre, the performers were of all ages and all brought their own unique spin to the roles that they took on. Every one of them appeared to enjoy their roles and that in itself will convey to the audience. Everyone had equal opportunity to shine and, as a result, it’s difficult to pick out individual performances.

I wish Double Act Drama Group the best for the remainder of their run. There are shows on the 25 – 26 March 2022. Whilst suitable for children, I would proceed with caution if you plan to take a child who has a particularly nervous disposition as there are some scary costumes and loud noises.