As a young man, I worked in the book department at Harrods, and an abiding memory is of how the novels by ‘Miss Read’ about English village life flew off the shelves. I assumed that they were rather obvious and unsubtle evocations of the sort of roses-round-the-door existence that might appeal in theory (they would have hated it in real life) to the matrons of Knightsbridge and Kensington. Only later did I discover that the books are much more than that: they have their share of stereotypical rustic characters and events, certainly, but they are also full of humour and, among the trivial and the mundane, offer some perceptive viewpoints on human frailties, on kindness, on social distinctions, on ageing and on mortality.

These characteristics have been skilfully reproduced by Ron Perry in his adaptation of the books for the stage, Thrush Green, whose world premiere the Redlynch Players are giving as their 60th anniversary production. On both counts, the first night felt like a pretty special theatrical event, and the performance lived up to the occasion.

If you are going to present a play about rural England, where better than a marquee in the middle of a meadow, its buttercup-freckled surface visible through the transparent walls behind the performing space? And if tractors trundling along the nearby lane to and from the hayfields are an occasional distraction, what could be more appropriate?

The play recounts the event of one day in 1960 when Mrs Curdle’s travelling fair arrives for its annual visit to the village of Thrush Green: the performing area is dominated by her gipsy caravan. Storylines run through it – Mrs Curdle’s health, a romance between her grandson and a local girl, the future of the village’s GP practice, the iniquities of Mrs Curdle’s nephew – but it is basically a series of cameos or sketches whose prime purpose, while advancing those storylines, is to present for our enjoyment the characters of the village. In this respect the play has distant echoes of Under Milk Wood.

The piece is held together by the GP’s wife acting as narrator. In this part Debbie Shipton is perhaps the production’s greatest asset: attractive and confident, with lovely diction. Sarah Newman makes Mrs Curdle a sympathetic character but a matriarch to be feared if you cross her. How well she has conveyed a tired old lady throughout is revealed only when she positively leaps down her caravan steps for the curtain call!

In some ways it is invidious to pick out performances from such a large cast in what is essentially an ensemble piece, but Ali Silver is splendid as the formidable Ella Bembridge, not only in her delivery but in her body language. Her love-frustration relationship with put-upon fellow-spinster Dimity Dean (Melanie Newbery) – think Edna Everage and Madge, but more subtle – is beautifully played on both sides. Josephine Kaan as Molly Piggott and Luke Futcher as Ben Curdle provide the love interest charmingly, with Luke giving a particularly confident performance. Mark Everett makes an excellent job of playing Molly’s father, Albert Piggott, more than ready to tell everyone how hard-working and put-upon he is, especially ‘since my operation’.

Ron Perry is in that enviable position for a playwright of directing his own work. He makes skilful use of the unusual ‘stage’ and has masterminded the scene changes, with the cast carrying on props and furniture, so that 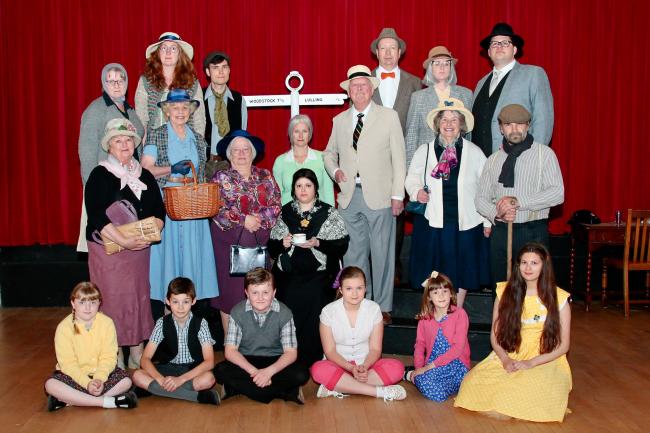 they seem quite natural. The only possible criticism is that there are some extended silences, for example as the tea is being served at the Fuchsia Bush café, at the Piggotts’ supper table and as Mrs Curdle drags herself up and down those caravan steps. These slow the pace, as does the tendency of some of the cast to lag on their cues, although this aspect will no doubt improve as the run goes on.

The last speech in the play belongs to Mrs Curdle and is along the lines of: ‘I never come to Thrush Green but that I leave feeling better.’ The sold-out audiences for the rest of the run will surely be saying the same, and it will be no less than this outstanding evening deserves.