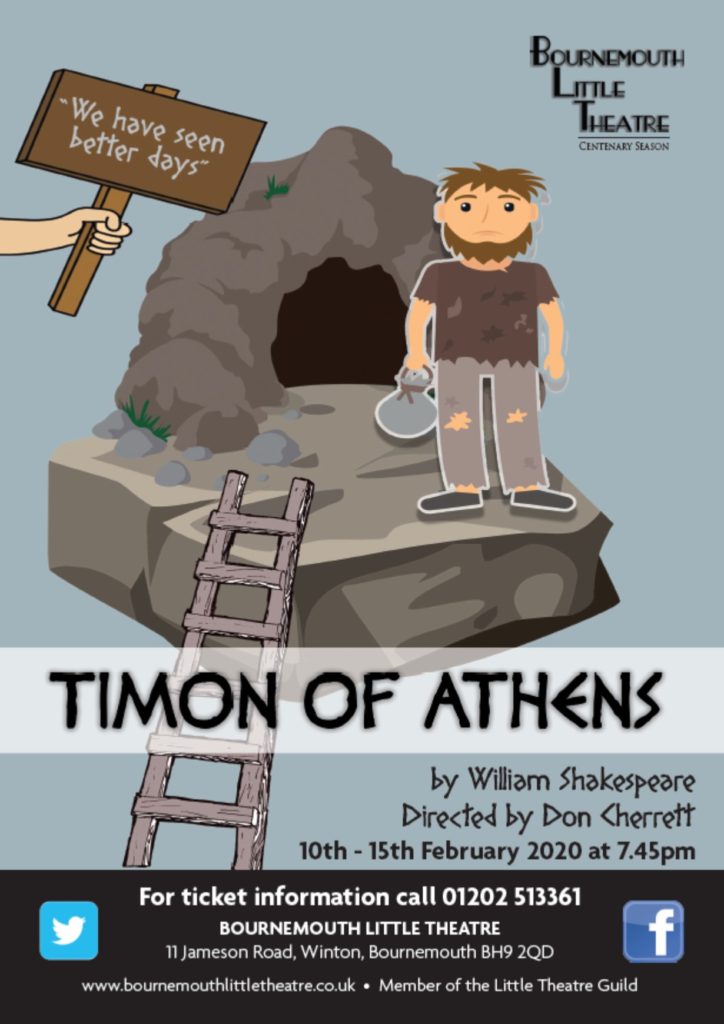 Compared to many of Shakespeare’s plays Timon of Athens is relatively little known and not often performed. It is a brave move by director Don Cherrett and the Bournemouth Little Theatre company to take on this challenging work. It is traditionally associated with the tragedies, but some regard it as a ‘problem play’. Some commentators compare it with King Lear; its conclusions about wealth, life, friendship and mankind in general are certainly not uplifting. In anticipation of this review, I read the play a few months ago – so I had an idea of its themes, plot and complexity. Watching it performed live, with all the pitch, pace, pause, inflection and associated action, makes much more sense than reading the dry, 17th century text.

The director has set this production in modern times – the soldiers have guns, the ‘gold’ discovered by Timon consists, at least in part, of paper money and the gifts that Timon gives away in Act I include both cheques and the keys to a car. Setting it in modern times allows women to take much more of a role than they would have done in either Shakespearian times or in ancient Athens.  Members of Timon’s staff and ‘friends’, as well as the Poet, the Painter, the Jeweller, the representatives of the creditors and even two of the senators are women – playing women. There is some modification to the text involved and some re-attribution of lines – but not too much to detract from its essentially Shakespearian character. A keen eye might note that the tee-shirt worn by Varro’s Representative (Molly Jackson) has the branding of ‘Varro’s Vino’s’ and that the catalogue held by the merchant (one of at least three parts played by Carole Allen) bears the title Merchant Merchandise, Athens Finest Goods, February Catalogue – good attention to detail there. The inclusion of the modern Greek dance music into the scene changes is welcome and not obtrusive and the transformation of the play’s bandits into two bumbling Frenchmen (Marc Pinto and Peter Beebee) introduces some levity into Act II.

The inventiveness with which the small stage at Jameson Road can be pressed into service as the exterior of Timon’s house in Athens, his dining room, Lucius’ Taverna, a courtroom, a forest with a pit which conceals both treasure and carrots, a first-storey cave and, ultimately, a grave has to be seen to be believed. Effective use was made of the split levels and lighting and the cast brought some items on and off to set the stage. I found the elaborate and mystifying ‘dance’ of assembling the dining room furniture to be rather long-winded – but it is a minor point. The cast of 17 took on the roles of at least 30, with some members taking on three or four parts.

Brian Woolton, as Timon, is undoubtedly the star of this show and he handles both the changes of mood and the complex dialogue with consummate ease. Martha Jenkins plays a sympathetic role as Timon’s loyal steward, Flavius, while Denise King doubles as both another loyal servant, Flaminius, and dances provocatively as the prostitute Timandra. It is unusual to make a lengthy speech on stage with one’s back to the audience, but the appeal by Bob Rankin, as Alcibiades, to the senators on the tier above is very effective. There are too many supporting roles to mention in detail but all perform without prompt and mostly without hesitation.

Tonight’s audience were unsure whether or when to applaud, but this is a very well produced and acted production for which Don Cherrett and the cast deserve much credit – and a bigger audience.

It runs every night at 7.45pm until Saturday 15 February.