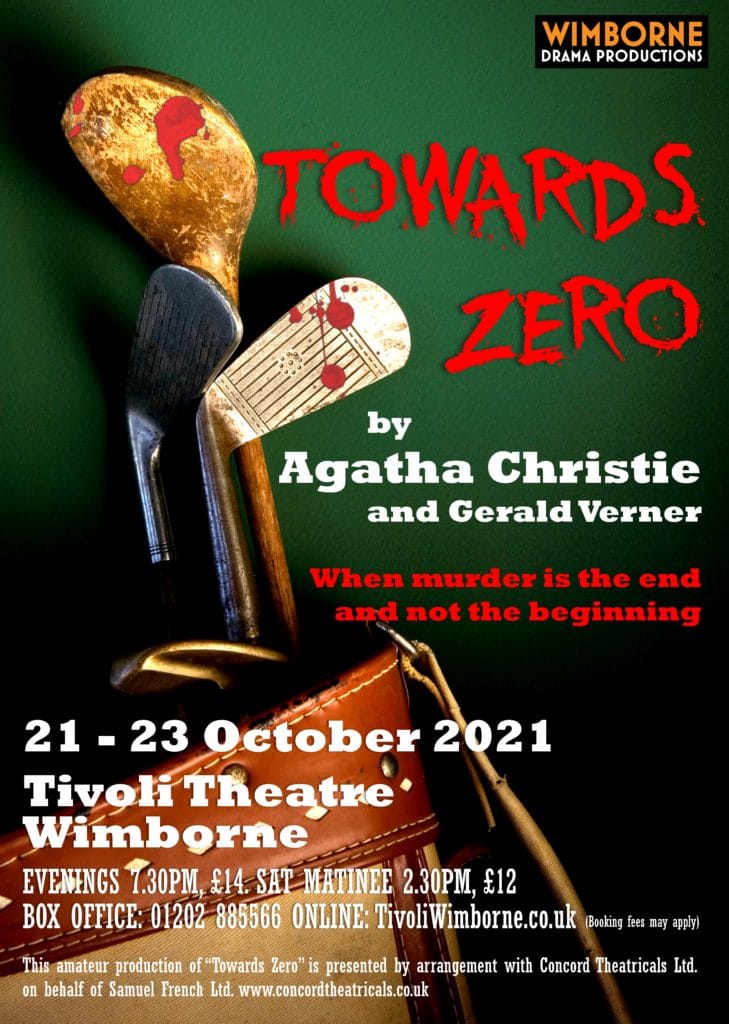 People who go to the theatre do so for all sorts of reasons: to escape; to confront and deliberate upon social and political issues; to laugh; to be moved; to puzzle over who done it; to be entertained; to support friends (if amateur) or favourite actors (if professional) and more. Some go for all of those reasons while others are more inclined to be dismissive of what doesn’t suit their preferences. I suppose that the plays of Agatha Christie and of others who write within the ‘thriller’ or ‘detective’ genre could be comparable to Marmite but, if that predisposition keeps anyone away from productions such as Wimborne Drama Production’s current offering, they are missing out.

I’ve long disliked the term ‘amateur’, with its all too easy connotations of ‘amateurish’. The best – not just the very, very best – of amateur theatre can match much within the professional sphere and this production certainly does so. The company might be ‘amateur’ but the production is certainly professional.

Towards Zero, adapted from her novel of the same title by Christie and thriller writer Gerald Verner, certainly contains elements familiar to devotees of the genre that she so substantially helped to shape. The key premise herein is the idea, self-referentially articulated by one of its characters who has been somewhat unimpressed by the crime novel he is reading, that most tales of murder begin with the deed whereas it would be more plausible to conclude with it.

While such plays might prove popular pieces to stage within many amateur theatre groups, it would be easy for them to underestimate the dramatic challenges that they present. That in no way applies to WDP’s Towards Zero or to director Paul Dodman’s realisation of Christie and Verner’s play. Attention to detail characterises all aspects of the production: thoughtful without being fussy, from the set design, including set dressing, through wardrobe, lighting sound and a set of performances that include no weak links but work extremely well both individually and collectively.

While commiserations must go to Lindsay McGowan, robbed of the rewards for her hard work by illness, particular praise must equally be apportioned to stage manager Michelle Barter who steps in as Mary Aldin. I’ve seen a script used on a stage by a very well-known and highly regarded member of the profession a few years ago at Chichester and Michelle Barter manages the challenge every bit as well, referring to the script, when required, in as unobtrusive a manner as could reasonably be expected while genuinely creating a characterisation true to the writing and giving a performance consistent with those around her.

At the heart of the drama, the love triangle of Nevile Strange, wife Kay and ex-wife Audrey brings three excellent performances from, respectively, Sam Moulton, WDP débutante Jo Eva Edington and Tracey Nicholls. The interplay between the three and with the other characters is extremely well done. In another, more uneven production, I would have space to sing the deserved praises of each at greater length. Equally, Tony Feltham and Rob Cording-Cook craft thoughtful, sustained and consistently believable characterisations for Thomas Royde and Ted Latimer, arguably supporting roles but, in terms of their significance and portrayal, certainly more than that.

As Lady Camilla Tressilian, the matriarch presiding over and quick to share her opinions on the domestic web at the play’s heart, Ann McColgan-Clark immediately conveys the febrile and embittered nature of the character, doing so at times savagely but always avoiding the all-too-tempting trap of falling into caricature or cliché. Similarly, albeit in a very different role, Richard Neal’s Superintendent Battle is authoritative and convincing, an individualised characterisation never straying into any sort of stereotype. As good as any performance here is that of Chris Durham as Mathew Treves, not only in his management of that character’s central role in the latter stages of the play but consistently from his very first appearance. And, while their roles provide less with which to work, James Bourner as Inspector Leach and David Beddard-Banks maintain the overall standard – no token portrayals here. Casting can present challenges and enforce compromises for a director, but it is a particularly impressive feature of this production with all on stage absorbingly inhabiting their characters.

The acting throughout this production is convincing by its naturalness while, from the opening lines, pace and variation in tone and mood reflect admirably upon all members of the cast and on director Paul Dodman. Movement always feels natural, never forced or obtrusive, always driven by character, plot, dialogue and interaction. Director and cast should all feel very proud of what they have created. Clearly, Dodman’s vision has been very clearly communicated to and understood by his WDP design team and the Tivoli’s own technical team as every visual and aural aspect of the production works very effectively. It is hard to imagine how the direction could have been better judged than it is.

As theatre comes back to life after its enforced hibernation, the challenges that face groups include regaining audiences, so it was pleasing to be a part of a very good house on Friday evening, the more so since the audience’s response was so genuinely positive, with applause at the end of every scene and very obvious appreciation of an impressive performance.

The run concludes with a matinee and an evening performance on Saturday 23 October. If anyone reading this has been in two minds about either returning to theatre-going generally or attending a performance of this specific production, I would urge you to set aside any doubts and go.