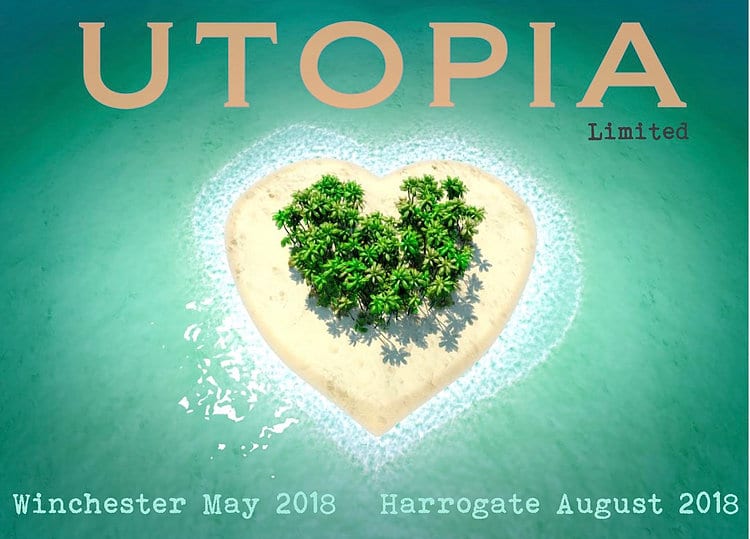 King Paramount rules the monarchal south sea island of Utopia – at least, he thinks he does. At any time, the two wise men, Scaphio and Phantis (Mark Ponsford and Wesley Buckeridge), can denounce him to the Public Exploder who would succeed in his place after blowing him up with dynamite. Scaphio and Phantis use this to their advantage, encouraging Paramount to write scurrilous articles about himself in the Royal newspaper which severely hampers his attempts to woo Lady Sophy, the practically perfect English governess to his two youngest daughters.

Meanwhile, Paramount’s eldest daughter, Princess Zara, arrives back from her studies in England (somehow acquiring an American accent in the process for a very topical reason), accompanied by representatives of the British Army and six members of the Royal Family, one of whom convinces Paramount to turn Utopia into a limited liability company as they ‘improve’ the island with all of the qualities that have contributed to England becoming a “powerful, happy and blameless country”. Indeed, “what could possibly go wrong…?!!”

Director David Tatnall has created an irreverent, modernized and at times surreal production of this little-played G&S operetta. Despite some directorial touches that I found became irritating quite quickly and diction not being perfect throughout (there were times tonight, particularly in the company numbers, when the harmonies were beautifully sung but the words were overwhelmed by an otherwise mellow and melodic orchestra), the soloists ensure that the narrative is clearly portrayed.

Peter Barber has a powerful and richly deep voice, commanding the stage as King Paramount; Lisa Axworthy’s operatic voice soars as she (Princess Zara) enjoys the fervent attention of Simon Meanwell-Ralph’s Prince Harry and the flirtatious nature between the two characters is perfectly timed for the corresponding Royal Wedding this weekend. Suzanne Hall is excellent as Tarara, the surprisingly Celtic Public Exploder, with great characterization, comic timing and plenty of bolshie attitude.

With a number of the company producing distinctive and entertaining cameo characters as well as their ‘named’ roles, there is something for everyone to enjoy, including the tributes to iconic musical moments from Mary Poppins (aka Lady Sophy, beautifully sung by Katie Hickson) and possibly Chitty Chitty Bang Bang (the origins of having the two youngest princesses presented as clockwork girls was one of the more obscure ideas, although very well performed by Lucy Whiteman and Lyndsay Smith). The topical twist of bringing leading members of the Royal Family to the island works very well indeed; the caricatures are instantly recognisable, with no better impression than Adrian Hickford’s of Prince Charles and his relationship with Camilla (Lorraine Morgan).

It is a little over five years ago that I was in the audience for Pocket Theatre’s performance of Utopia (also directed by Tatnall) and, with very fond memories of that production, I was looking forward to seeing the latest interpretation. Although arguably two productions shouldn’t really be compared to each other, when there are a number of familiar elements between that version and the one that he has directed here for WMOS, it is virtually impossible not to; regretfully not all of these have transferred favourably from the intimate Hanger Farm converted barn venue to the more spacious and traditionally theatrical venue of the Theatre Royal, not helped by the stalls being less than half full on opening night. For example, the recreated heat and intensity of the tropical island at Hanger Farm is lost in the expanse of the Theatre Royal, despite the bright and bold colourful scenery, but Zara’s arrival on the island accompanied by the Army is very well created.

This may not have been the Utopian experience that I was hoping to repeat, but it is nonetheless a pleasant way to spend a balmy evening and deserves to have a bigger audience.