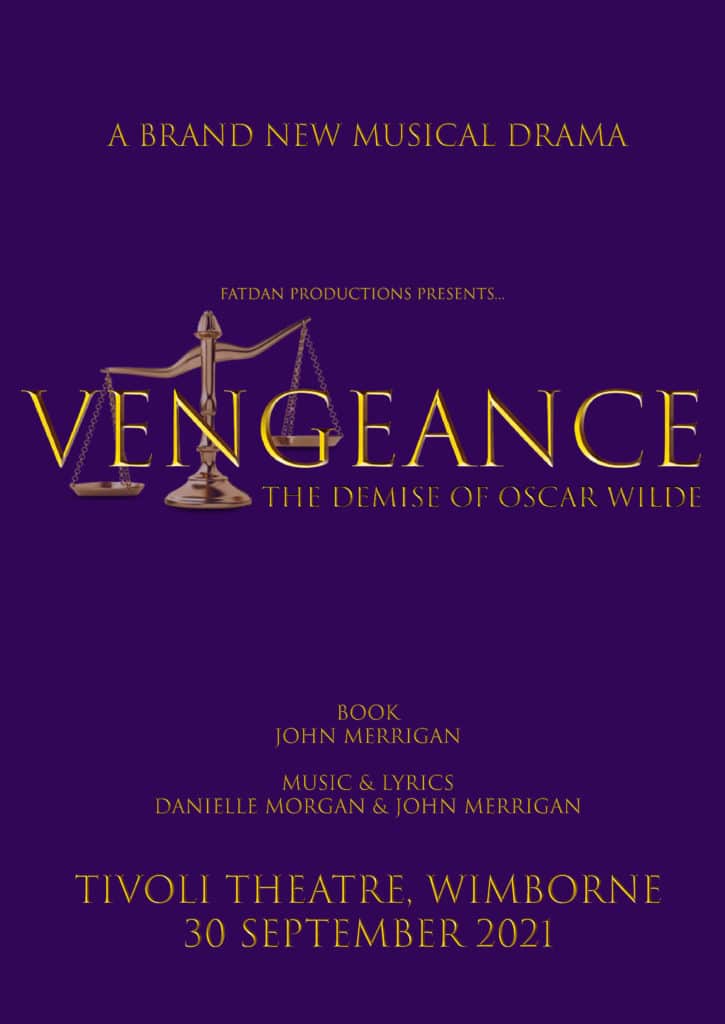 Over the last 18 months I have gained a profound respect for the artistry and creativity of individuals within the arts, not just those who perform onstage, but those who write, direct, compose, produce, and all of the other roles along the way. Whilst it is always interesting to see well-established musicals which have been in circulation for a long time, it’s not often you get the opportunity to see something completely new and different which reminds you of the hard work that goes on throughout the writing and production processes.

Vengeance is the story of the demise of the revered, but extremely controversial at the time, poet and playwright, Oscar Wilde. The musical focuses on his life following the release of one of his final pieces of work, The Importance of Being Earnest, and guides the audience through his infamous criminal trial which is, in many places, quite heart-breaking. A theme that echoes throughout the production is a profound respect of the protagonist, with the story being very accurate. In what is a very sad story, it was refreshing to see that it wasn’t heavily dramatised for effect, and John Merrigan and Danielle Morgan have done an excellent job of bringing history to the stage.

The show was staged at the Tivoli Theatre which was a perfect setting for it given the play is set initially in 1895. The scenery was basic and was utilised effectively throughout the performance with the passing of time and location created through lighting effects. This did work; however, there were some slight issues with lighting throughout the show, and, on occasion, the lighting was either to dim, or too bright for the audience to effectively see the performers. The show also used smoke effects throughout and this became a little bit overwhelming, especially at one point where the use of smoke was excessive and rolled into the auditorium. However, these are minor critiques and didn’t take away from the overall quality of the show.

In the titled role of Oscar Wilde, Riley Clark shone with excellent acting ability and strong, assured vocals. He played the role of the eccentric and creative Wilde with skill, showing the audience both his arrogance and vulnerabilities. John Newcombe was also excellent as the single-minded, bigoted Marquess of Queensberry, who was portrayed as the villain of the story. He made the character extremely unlikeable, although showed the audience a slightly softer side towards the end of the show.

David Keogh had the challenging role of narrating the story and featuring heavily throughout the scenes, a challenge he rose to well, showing the frustrations of a long-suffering friend of a great man. Martina Greenwood played Constance Wilde with great emotion showing the sadness of a wife whose husband wasn’t what she had hoped. There were some particularly emotional moments in act two where her acting shone.

There really wasn’t a weak link in the casting of the show, and all of the actors brought their own unique style to the stage. Some in many different characters along the way.

For me, the written drama outshone the musical aspect of the show. Although there were some good songs, particularly ‘Everything Happened Overnight’, ‘Bring Him Down’ and a beautiful song which featured in the final scene of the show.

Overall, a really good show and certainly one to watch if you love to see new musicals, or are interested in the life of Oscar Wilde.