I don’t think it is sycophantic to say out loud that ImpAct Theatre produce some of the highest-quality theatre around these parts, and have been doing so for two decades or more. It’s a fact. So when I’m asked to review an ImpAct Theatre play, I feel that I’m going to be in for an evening of watching some terrific acting and an interesting story. I’m yet to have my first disappointment, and Visitors kept up my record of ‘never disappointed in an ImpAct Theatre show’.

Visitors, by Barney Norris, is a multi-layered piece of theatre. It is a study of age, of rejection, of frustration and of True Love (I always hear Peter Cook from The Princess Bride in my head when I say those words…). It centres around an ageing couple, one of whom has an onset of dementia. The visitors of the title are their son and a young house-guest, staying with them on a programme which offers a home to someone making their start in life in return for company and help with household chores – a pretty good idea, I think. The son is brash but somewhat disenfranchised in the familial area of his life, but still, in an angry way, wants to do his best by his parents. 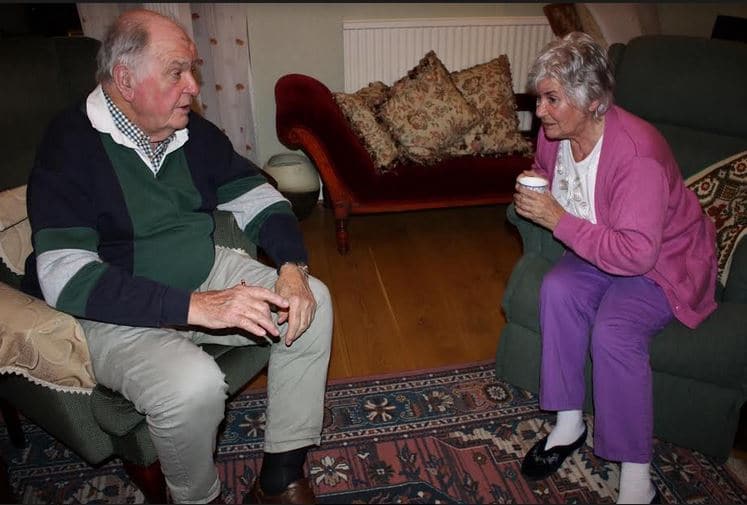 The ageing couple are portrayed by Linda Denning (Edie) and Mike Griffiths (Arthur). To say the acting is brilliant does something of a disservice to it. It is effortless from both players – whether it is experience shining through, or simply mesmeric talent, I don’t really care. Watching them is a joy. Chemistry in abundance and it just felt easy and pretty rewarding to watch them.

As the house-guest, Kate, we have a relative newcomer in Zoe Keith. She wraps herself into the role with grace and aplomb, quickly becoming an integral part of the lives of all the other three characters.

As Stephen, the son, Brian Woolton is exceptional – which is becoming of an actor of his experience. He is easy to watch, but gut-wrenchingly excruciating in one or two of the story’s more awkward moments. This is a top performance.

In Visitors, director Patricia Richardson has found a play that is a wonderful slice of life, while being a real study into many stages of the human condition. And she creates a story worth watching. That direction, combined with the (again) superbly accurate set dressing from Margaret Eaton, realistic sound from Gary Hayton and beautifully atmospheric and well-timed lighting from John Willmott means that I will have to wait until next time to try and be disappointed in an ImpAct production. I…er…won’t be holding my breath, though.

Future performances: 18 March at the Tivoli, Wimborne and 20 March at the Shelley Theatre, Boscombe, at 7:30.